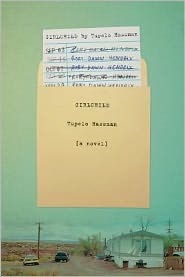 When I’d first heard of Girlchild, I left with the impression that it would be a story set in a harsh landscape with a resilient and quirky young protagonist—ala Susan Patron’s Lucky or Kate DiCamillo’s India Opal. But this is no children’s book. I should have read to the end of this Maureen Corrigan NPR review beforehand where it notes: “Rory endures sexual abuse, the death of loved ones, and everyday invisibility — all without playing for our sympathy.” The sexual abuse she endures is really difficult even without the play on sympathy, and it comes early in the relatively short novel, so plan bedtimes accordingly; especially if such recordings (fictional or otherwise) affect you and you need that time to sleep and not wonder if the nausea will take on an even greater physical manifestation. This is not to say that the author Tupelo Hassman does not handle the events with care. Hassman’s command of language and story is plenty effective with out straying toward any edge of the graphic. And she uses the structure of the story and its narrative styles to move in and away with a beautiful sensitivity to her protagonist (and reader)—and her uses of form, perhaps more importantly, to relay Rory Dawn’s experience. Similarly we see this with the mother’s childhood, having to rely much more on her encoded language and actions.

Girlchild is a novel set in the harsh landscape of a trailer park at the edge Reno, Nevada where a resilient young protagonist lives with her mother near her maternal grandmother. Rory Dawn Hendrix is made unusual by her surroundings in how well read she is, how remarkable her comprehension is, and that she treats the Girl Scout Handbook like a guide for better living. But the story isn’t only about Rory Dawn, but about her mother (Johanna Ruth) and maternal grandmother (Shirley Rose). “I know the stories about Grandma’s failures in the mothering department, and when it comes to Mama I could tell plenty of my own;” but as she observes further down the page, “there is a tenderness that runs quiet but sure in our blood and reveals itself as dependable as bedtime” (69). Rory is her mother’s girlchild, both a dream come true (after 4 boys) and a fear—she doesn’t want for her daughter what she had and has gone through as a girl & woman herself.

Girlchild shows a grit and resourcefulness in the women and in communities who live in oppression and/or poverty, and it does not shy away from criticizing the ideology that holds them there.

“The Girls Scouts and V. White [the caseworker] have one thing in common: they like to play it safe. V. White didn’t ask how far Mama could go, just how far a person like Mama has to go. She was only interested in the shortest distance between Mama being on welfare and earning enough to stay broke without welfare’s help, or better yet, figure out why Mama didn’t stay married just enough to keep off the dole altogether. As far as V. White was concerned, there was no reason for the County to send Mama to college and be made smart when, for less time and less money, she could go to vocational school and be made useful. (163)

Between the mother, Rory and the anthropological observations about the Calle, there is a lot to think about in explaining why so few get out, and how there is enough blame to go around. Another politically charged moment is when Rory has to write a report on the Fourteenth Amendment: Equal Protection of the Law. The librarian (a heroic figure) draws Rory’s attention to landmark legal cases and she settles on one in which she finds true connection: Buck v. Bell (1920s); “Based on [Supreme court Chief Justice Oliver W.] Holmes’ decision, upwards of fifty thousand intellectual defectives were forcibly and legally sterilized before the practice was quietly brought to an end in the 1970s” (173). A decision, the author notes at the end, that has yet to be overturned. The connection is found how Rory and Vivian Buck were of similar age, and the third generation of women who could be construed as feeble-minded and thus inevitably promiscuous, with a sense that their outcomes were dictated by heredity rather than environmental factors. After a rather striking passage on the case, a question is posed:

“Which statements are true according to the passage?

A) Science, governments, and your doctor should be trusted.

B) “Comforting her deep into the night: is a euphemism for sneaking candy.

C) The ugliest phrase used in this passage is “female.”

The text, via Rory and many of her fellow characters, push against a sense of resignation regarding their fate, or rather, expected outcomes.

“When I get home I wait until after Mama’s asleep to take my paper out and read it again, the details of Holmes’s decision, of Vivian Buck’s life, how he couldn’t see that the equal protection the Fourteenth Amendment promises applied to Viv and Carrie’s lives, to their futures, that it applied to their bodies too, and how this probably means the Fourteenth Amendment just isn’t going to be enough to count on for the rest of us either. And then I read mrs. Croxton’s notes again, about how the “unfortunate mistakes” made in the case of the Bucks aren’t important enough to overshadow “the victories that have been won for the underprivileged.” Mrs. Croxton wanted pretty pages about how far we’ve come since slavery, not ratty truths about what work awaits us with the other groups still deemed less than human.” (178)

The above “Which statements are true” is indicative of just one type of chapter you can expect in Girlchild. She has very poignant “math-word problems” with multiple choice answers and a spacing with the encouragement to “show your work;” case file reports; a singular sentence; a chapter completely or mostly marked out. Chapters are short and are not linear in sequence, though they begin to hold chronology and segueing connection as the novel continues. The more anthropological pieces are fantastic (like “Funeral Etiquette”) and the sections on “how to earn ______ badge;” the chapter: “Proficiency Badge: Puberty” (222) is a must read.

Really, all of Girlchild is a must-read. Amy Greene of Bloodroot is quoted on the jacket, “I couldn’t stop reading until the heartbreaking but hopeful end, rooting for Rory Dawn Hendrix to make her own destiny.” I did the same, honestly wondering, as the latter pages began to dwindle if Rory, would get away. Did she? It reads like a memoir without the tradition of one. It holds the kind of heartbreak we shouldn’t keep ourselves from experiencing, if not considering. There are parts that are really difficult to bear, some language or action that may startle, and any optimism is hard-won. But the form in which the story of Rory Dawn Hendrix’s youth is translated is not to be missed.

The writing is gorgeous, unfailingly so. Hassman can turn a phrase, she can paint any number of inescapable portraits with a word, sentence, paragraph, or chapter in perfect variance and she stacks them all neatly before she knots the cord around them. And then she lights it. Sometimes clever or genius seems too “literary” or so high-fallutin’ as to be impenetrable. And it cannot be ignored that Ms. Hassman has stellar writing credentials. But Girlchild is accessible. Rory’s mom is a fan of Kerouac, and little wonder if the author isn’t as well.

Girlchild by Tupelo Hassman is easily one of my favorite reads this year, and I look forward to owning a copy; maybe two, one to lend; one to make sure N has herself a copy, too, in a few years.

Doret’s readerly response at The Happy Nappy Bookseller (where I’d first heard of it, I think).

the NPR review, “Scrappy ‘Girlchild’ Forms A Girl Scout Troop Of One” by Maureen Corrigan link again,  where you can find an excerpt of the novel there, and in which I must add that I do not think the title is “corny” but rather apt when you consider the anthropological tones/stylings and the social implications of having and being a girlchild; that it was a pet name was just a nuance.