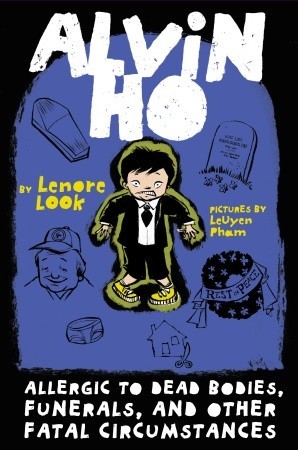 A cure for those hours steeped in academia ala textbooks and essays? Lenore Look’s Alvin Ho. I’ve been intrigued by the title for awhile, Alvin Ho: Allergic to Dead Bodies, Funerals, and Other Fatal Circumstances, so when I saw it face-out on the Library shelf I brought it home. This is the fourth book in a series that I’ve been assured will continue with a fifth in 2013. I picked up the other books from the Library today. Yes, I adored my first treatment that much.

Let’s face it. When it comes to death, everything is scary. Especially if your name is Alvin Ho and you maybe, sort of, agreed to go to a funeral for your Gunggung’s best friend (who was your friend too).

Alvin’s all freaked out, and here’s why:

But being brave is hard. What if Alvin’s not ready to say goodbye to someone he loves?

Alvin Ho is an anxious 2nd grade boy. I don’t know what is going on with him, but he seems frightened by most everything (real or imagined); which, of course, is the greatest source of the reader’s angst and amusement. The sweet comes from Alvin’s ability to articulate his anxieties with childlike brilliance (you know, that coincidental poignancy young people often express in their language).

And the hair tangled into a hairball.

Look has a great way of describing things.

The story surrounding a serious topic takes on the morbid curiosity and fantastic imagination of the young. For example, their living in Concord, Massachusetts, the local kids think the Historic House tours are led by the ghosts of the celebrity occupants. The story takes unexpected turns that remain consistent with the characterization—I realize this should be a given, but it feels especially organic in this instance.

I must add my adoration for the family and friends.  Alvin has loving parents and grandparents; and his siblings are sources of frustration and affection, in other words, familiar. (Man does big brother Calvin sound like my two older brothers combined.) The school staff seem to get Alvin, and I absolutely love Flea. (“She’s a girl and she was all dressed up like a girl too, which, as everyone knows, is horrible, especially when it makes her look clean and shiny like a new car.” 179) Characters have their quirks without running risk of being cute. The father and his cursing in Shakespearean had me laughing out loud. There was a lot that had me laughing. The novel was punctuated by a deeply felt smile. Look has an excellent sense of timing. And her hand with suspense isn’t too shabby either.

“Deep breathing helps when the heart falls out of your chest. I learned this from the psycho who is my therapist, but I could never remember to do it, until now.”(43)

I was so thoroughly charmed by this read. I don’t know how well it goes over with the young (intended) audience, but reading these with a child would be no chore what-so-ever.

The Illustrations have as much personality as the words. And LeUyen Pham does not skimp on the quantity. They are a really nice company and I think they free Look to spin lovely similes and metaphors. Want to cultivate a young writer?–or Illustrator? [check out Pham’s site.]

recommended: for any young grade-school reader (or learning to read), and even older elementary because they can probably laugh a bit more easily (having survived the earlier grades); for those who prefer books you may learn from but is not heavy-handed (obvious) with the messages. Look/Pham offer a light-hearted treatment of the subject Death and Dying without losing gravity.

of note: I noticed what seemed to be references to earlier books, but I was not lost or deprived of enjoying the read.

The different cultural responses to Death and burial (or non-) are nicely sewn in and very interesting. Not only would this make a fun read for a family, but a source of great conversation as well. Allergic to Dead Bodies is a good Readers Imbibing Peril (RIP) suggestion that will help you include the younger members of the family.