His A Book of Sleep in the board book version is a favorite. 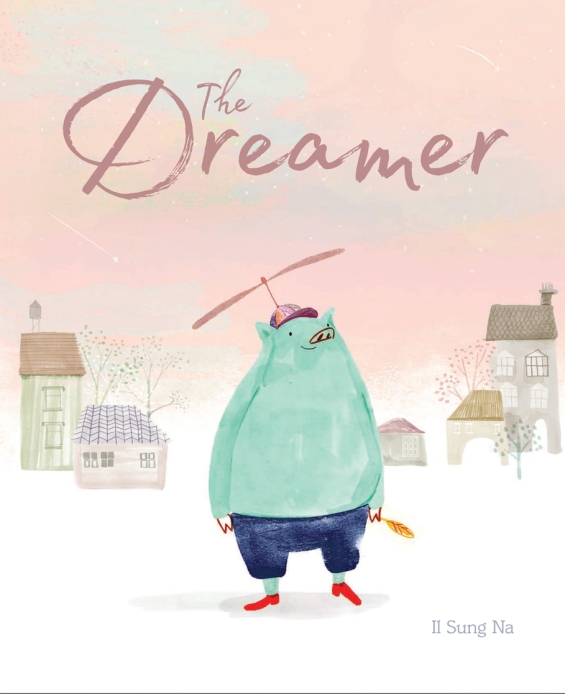 The Dreamer by Il Sung Na

The question of whether pigs could fly is not new to picture books; neither is the desire to fly rare. If an engineer/inventor character in a STEM-book isn’t constructing a robot, it’s a flying contraption. The Dreamer is a lesson in why I shouldn’t underestimate an artist’s ability to make something new from recycled parts.

“Once there was a pig who admired birds,” the book begins. He doesn’t merely wish he could fly. He doesn’t wish he were a bird. He admired the birds. And he wanted to “join” them and when they migrated, he wanted to “follow.” Already Il Sung Na sets an unusual tone.

The dreamer doesn’t want to fly or become a bird out of envy, feelings of inadequacy, or to become something he’s not, or whatever other negative, yet plausible motivations we’ve been presented with before. The dreamer admires the bird–feels awe and inspiration–and begins to wonder if the belief that pigs do not fly is a foregone conclusion.

Cue the research phase ala formulas on the blackboard, then the collecting materials, building, falling, failing again and again. The dreamer returns to pondering the problem. And after inspiration strikes, “hope blossomed” (grew) in the form of a team of collaborators. “But even with help, it was not easy.”

Cue the part of the book that really caught my attention. “So he listened.” Pig and friends enter little vignettes where different birds are talking as they watch and listen and take notes:  a kiwi, an ostrich, a penguin, a hen, a parrot. Note with an amused smile the speech bubbles.

They return to the drawing board. And guess what?

Their success extended both the dream and the dreamer’s reach. A plane that could carry the dreamer around the world becomes a rocket that takes him to the moon.

And “Soon the world wanted to join him” in flight, and the various animals in a variety of flying machines are wonderful. You can’t help but think how this came about because the dreamer was admired by and had inspired those around him; just as the admired birds had inspired him.

The dynamic of not only pursuing the dream, but refining the process along the way is striking. As is how Il Sung Na illustrates–in an accessible and often humorous way–the dreamer observing, experiencing awe and inspiration, imagining, listening, and formulating, of collaborating and trying again and again, and to not even end the story there. The dreamer remains unfinished.

The dreamer found his beginning out on a ledge against a white sky, overlooking a valley of barren trees. At the book’s close, we return to the pig on that ledge, the sky with color and stars, and the trees with leaves on them. You are invited to wonder where this next season and next beginning might lead: “Once, there was a pig who admired birds.”

Paint me impressed with this beautifully nuanced, honest, and endearing portrayal of a dreamer. You’ll want to add this to those STEAM libraries, there are not too many like it—yet.

Always mind the endpapers. Look who joins the row of birds at the close.

Il Sung Na was born in Seoul, South Korea. In 2001, he moved to London to pursue a BFA in illustration and animation at Kingston University, where he discovered a passion for children’s books. He lives in Kansas City, Missouri.