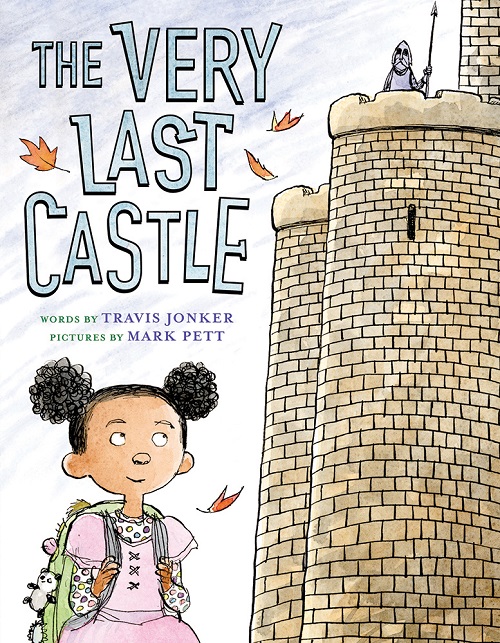 Ibb stops by the only remaining castle in the city every time she passes it. Across the moat, she is alone as she contemplates the mysterious castle. From the turrets, a lone guard watches people pass by.

Because no one has been in the castle, people have interpreted the sounds that come from the castle as

But Ibb is curious. She wonders if it’s true that the castle has monsters, giants or snakes. She wonders if the sounds could be something else. And one day she decides to no longer just wonder, but knocks on the door and, later, accept an invitation from the guard.

The Last Castle will need a second reading. Not because it is incomprehensible, but so you can delight in the hints given as to what could be causing the mysterious sounds. Hint: the silent full double page spread of the castle in winter.

I enjoyed, too, the impersonal watercolor washes to denote distance or disengagement. The first to arrive on the scene of the story with any differentiation in color, and full of texture and detail is Ibb, “then there was Ibb.” That Ibb dresses in princess gowns, tutus and wings, suggests she is like most children interested imaginative play: but she is also the one in dress-up who is interested in what is really going on—and not content with the local “lore.”

In that lovely Edenic ending, she reveals a few misunderstandings, and removes the barriers that isolate and distance the city folk and the castle guard. It’s a positive and timely message. I like that the solution is “be curious…,’ whether you are a child (like Ibb) or an adult (like the guard). I appreciate that stopping at the worst interpretation may not be the cleverest choice we can make.

Recommended for the younger mystery readers who like to be rewarded for minding the details; for those who like a good castle story; for those looking for more protagonists of color: Ibb and Alex; and an intergenerational book: there is also a grandfather (hers, and white).

Note: there is no reason for Ibb to be a Black, and no reason for her to not be. The white male creators of this book chose to center a Black female child as star of this mini hero’s journey; depicting her as curious, smart, courageous, compassionate, resisting, and a leader. It was an excellent decision.

Travis Jonker is an elementary school librarian and creator of 100 Scope Notes, a kidlit blog hosted by School Library Journal. He was a member of the 2014 Caldecott committee. Jonker lives with his wife and two children in Zeeland, Michigan.
Mark Pett is the author/illustrator of many books for children, including This Is My Book! and The Girl Who Never Made Mistakes.Before books, Pett created comic strips. He lives in Utah.