After reading A Darker Shade of Magic and Vicious, Schwab is an author I keep tabs on. I was super geeked to discover this new middle-grade novel of hers–and I was so not disappointed. 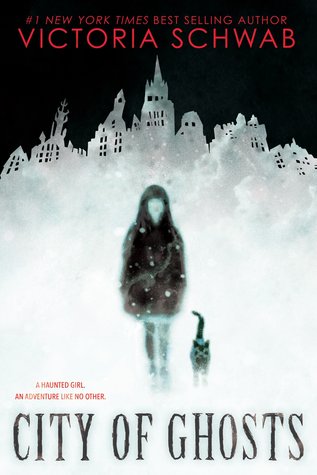 City of Ghosts by Victoria Schwab

City of Ghosts opens with a classic realist fiction scene of a middle-school girl in her classroom awaiting the bell, Summer Break nearing. She introduces you to her best friend, Jacob, and the strange things that have been occurring since that incident in the river.

“If we were in a comic book, this would be our origin story. Some people get a spider bite, or a vat of acid. We got a river.”

Cassidy is a delightful member of geek culture: disinterested in being a “popular kid,” loves comic books, is a certifiable Potterhead. She has a sharp wit and a sharp mind, and may be on the impulsive side. Cassidy is pretty awesome. I was really hoping this was going to be Book One before the first hint was planted.

Cassidy Blake is the daughter of The Inspecters, co-authors of history books with ghost stories mixed in, and they have landed the opportunity to take their successful book series to screen. They are going to tour the world famous haunts. First stop: Edinburgh, Scotland, City of Ghosts.

First Stop. All Cassidy has to do is survive the adventure—and do not think that is a given. Really, who knows what condition she’ll be in by the end. [well, those of us who read it do…] Maybe not everyone will make it either.

Indian-Scottish Londoner, Lara Jayne Chowdhury adds all kinds of troubling intrigue; and amusement.  A note for after you read this book: but anyone else think Lara Croft: when introduced to character Lara Jayne Chowdhury, with her impeccable braid, gaze, and poise; whose parents are off at a dig? I love this.

Schwab writes some fantastic characters, sets, action, and even the ordinary narrative shines.

“It’ll still be here when we get back,” says Mom, reading my face. “This is just a change of setting, a new storyline, a fresh chapter. We have a whole book to write,” she says, squeezing me around the shoulders, “and how do we write it?”

“One page at a time,” I say automatically.

It’s Mom’s favorite saying, and ever since my dip in the river, I’ve tried to hold on to it like a rope. Every time I get nervous or scared, I remind myself that every good story needs twists and turns. Every heroine needs an adventure.

So we pile into the cab, two parents, one girl, a ghost, and a ticked-off cat, and we head for the airport.”

Perfect for the audience, middle-grade (and adult) readers, Cassidy is trying to figure herself out and what the changes mean for her and the ones she cares about. City of Ghosts is a story of friendships and secrets and uncertainty. It’s an adventure story, with ghosts. It really has some nice tingling horror.

The ghosts, their context, the big-bad—they can get intense.* Cassidy is resourceful and has some awesome company—not just for the sake of humor, but as help. No one in this story is perfect (or overpowered), and this produces a nice tension in the novel. Too, we’re still figuring out how the whole ghost-thing works, uncertain what will or will not work–what can and will Cassidy do?

Schwab has captured the kind of voice many a middle-grade author should envy. City of Ghosts will have broad appeal. Not everything is revealed, questions have been left unanswered, anxieties set on just enough of an edge. But what will really have us coming back is Cassidy Blake. I hope we will not have to wait too long.

Shelve this between Harry Potter and Skulduggery Pleasant, alongside Holly Black, Neil Gaiman, and Jonathan Auxier.

*There are plenty of disturbing images and ideas to make some think twice about handing this to an early grade-schooler, but the beauty of the Harry Potter references is that if a young reader has read the entire series, this isn’t any darker.

One thought on “geeks & ghosts”