You know how, in the course of a read, a character becomes precious to you? Langston is one of those characters. He kind of reminds me of  India Opal or Jess Aarons* in that way. 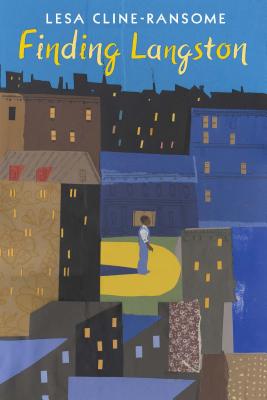 It’s 1946, and Langston is grieving the recent loss of his mother, as well as the loss of his home in Alabama. He’s had to leave his Grandma behind, the comforting familiarity of the land, food, people and its rhythms.

Langston’s father is seeking a better life (and distance) in Bronzeville Chicago. And the differences between the Northern City and the Rural South is not only startling, but haunting. Langston is bullied for being too country and its in avoiding a tormenter that he stumbles across something crucially different between where he is from and where he has come.

The George Cleveland Hall Library is for all Chicago Residents—not just white people. Here, Langston discovers a safe haven and a soul-mate. It’s a place Daddy would express concern over but his Mama would love. It becomes a secret that threatens a troubling distance with his father, but one that binds him closer to his mother. Langston’s discovery of Hughes reveals his Mama to him in new ways.

The first book he pulls from the shelf shares his name. And is Langston Hughes his namesake like the Librarian wonders? The little mystery the question of naming inspires allows Langston to find a way to think about his mother in this new city.

Any of lover of poetry (or storytelling) will respond to how Cline-Ransome writes Langston’s reaction to Hughes, “Feels like reading words from my heart” (22); “I have to stop. I can feel the choking in my throat that always starts right before the tears” (30); “This lady said the Langston who wrote these words is a poet. Seems more like a magician to me, pulling words from my heart I never knew I had” (32). There is more, and more poets.

You feel you learn more about both Langstons through the way Cline-Ransome writes their relationship. You are invited to imagine Hughes as a boy like Langston (possibly in Alabama, though we are reminded later that he is from Missouri and Kansas). Likewise, you can better understand some of Langston’s longings, culture and context in the language of the poet. Langston begins to adopt Hughes words to express his feelings in a moment when the concrete/setting description of that moment seems inadequate: “Sometimes when I’m lonely,/Don’t know why,/Keep thinkin’ I won’t be lonely/By and by.”

Cline-Ransome realizes even the most distant characters for the reader. You mourn the loss of a mother and Grandma and their home because you’ve developed a second-hand fondness. You feel the struggle of Langston’s father. You engage in the shift of perception of the neighbor Miss Fulton alongside (because of) our narrator’s shift. Even the quick sketch (time-wise) of the setting, the teacher and librarians, are marvelously effective. All this in 104 pages of storytelling (smallish margins, long paragraphing).

Cline-Ransome also packs a lot of the historical into those 104 pages, and just as smoothly as her characterization. I do not pity any young person who would have to write a paper inspired by this book. Cline-Ransome includes an “Author’s Note” to expand on the historical and cultural context and settings of the novel. I know she has written a number of picture books, but I hope Cline-Ransome writes more historical novels for young people, Finding Langston is so rich and compelling. The voices she writes and settings she describes are engaging.

His discovery of Langston Hughes and the George Cleveland Hall Library finds Langston (re)connecting with a number of people and places, learning new things about himself, his history, and a possible new future. This discovery, too, leads to an unexpected new turn for Langston and his father. Their distance was present from even before Chicago—Langston always shown to be closer to his mother in time-spent and interests—but their present circumstances create a greater strain. The question is whether Hughes or the Library will close the gap like it does for other relationships in the book. Because one of the most beautiful struggles in this book is the longing and effort both father and son bring to their relationship. You learn and understand where each of them are coming from, so much informed by the culture of the time and their difference. You never doubt they love each other, and damn, but that scene to close the book. Maybe a poet and a library will bring them closer together.

*Opal is from DiCamillo’s Because of Winn-Dixie and Jess Aarons is from Paterson’s Bridge to Terabithia.

You know, there are decent film-versions of Because of Winn-Dixie (2005) and Bridge to Terabithia (2007)…I wouldn’t mind seeing Finding Langston on screen. We need to talk to Oprah. In the meantime, you can find it in your library, and if you the young reader in your life cannot find it in their school library, I’d recommend its purchase (or just buy it for them).

Recommended for all the readers, not just the historical fiction reader; this is a good choice for the reluctant reader. Obviously this is a good one for April/National Poetry Month, and the classroom.