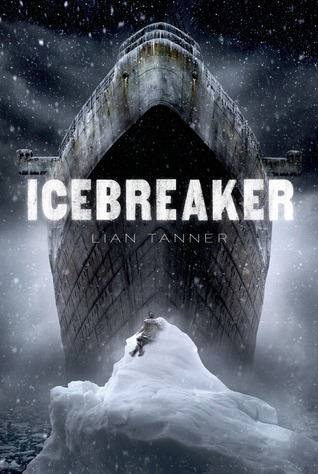 “Twelve-year-old Petrel is an outcast, the lowest of the low on the Oyster, an ancient icebreaker that has been following the same course for three hundred years. In that time, the ship’s crew has forgotten its original purpose and broken into three warring tribes. Everyone has a tribe except Petrel, whose parents committed such a terrible crime that they were thrown overboard, and their daughter ostracised.

But Petrel is a survivor. She lives in the dark corners of the ship, speaking to no one except two large grey rats, Mister Smoke and Missus Slink. Then a boy is discovered, frozen on an iceberg, and Petrel saves him, hoping he’ll be her friend. What she doesn’t know is that for the last three hundred years, the Oyster has been guarding a secret. A secret that could change the world.

A secret that the boy has been sent to destroy, along with the ship and everyone on it…” –Publisher’s comments

I hugged the book before I read it, and you can be sure I hugged it afterward. Why? Because Lian Tanner has written one of my favorite Juvenile Fiction Series (The Keeper Trilogy) and she did not let me down in Icebreaker.

Tanner creates rather than contrives her characters and their conflicts. It takes reading the novel to realize what I mean by that difference between the creating and the contrivance. The characters experience real, important change, within the boundaries of their personality. You labor alongside them in those pivotal moments.

Icebreaker is not for those who like to anticipate the story and control every outcome. Tanner doesn’t make her adventures easy on the characters, why would she make it easy on the reader? Tanner’s characters earn their stunning heroism and heart. That Petrel would arrive to a transformative state is perhaps expected, but what of the others, and what of the winding series of events that traverse the massive and entangle innards of the Oyster? There are clues to mysteries (Crab) for the reader to guess successfully, but the overall the sensation of honestly not knowing what is coming next is marvelous.

Tanner complicates her otherworldly stories in painfully realistic ways. Both Petrel (aka Nothing Girl) and the strange boy she rescues have internalized the beliefs of their respective adult worlds—and they have to push back for the sake of everyone. Theirs is a violent and devastated world. The different factions are rational outcomes and hauntingly familiar, yet there is a fine and cutting edge of ridiculousness in the situation. So much of the violence is situated in willful ignorance and incredible egoism. Squid is a still, quiet breath of fresh air.

The presence of tribal leaders’ children in the story is notable; especially the handling of daughters (like Squid) as game-changers. The offspring represent the attitudes of their tribes as well as the opportunity for change. The Braids’ leader, Orca’s daughter, is a horrible fascination and was no doubt one of the most tenuous to write. How to convincingly affect change in relatively few pages, and can we trust it going forward? Nothing Girl and the “rescued boy” (who represent two sets of “others” or factions) are convincing actors, posing in alternate versions of themselves, playing the role survival requires of them. The reader is helped to understand that there is a lot at stake when it comes to who and when to trust—and how to prioritize needs and wants. From the get-go, the question of whether a Nothing Girl should have rescued the boy on the ice haunts the story: Is he worth it? Is she?

The harsh setting is fraught with the kind of danger that inspires courage and resourcefulness, though the survivalist Petrel would downplay such aggrandizement of her reality. Yet while she may not find herself exceptional or worthy of manning the story, the reader will see what her few friends do, worth the risk-taking. She is so earnest, so damned determined and requiring of love. She is so damned familiar.

How Tanner manages to make such a horrible moment near the end, the realization of Nothing Girl as Petrel, to be also humorous… She has great storytelling instincts. Tanner is thought-provoking in unexpected ways, reminding the reader always of perspective (that there is always more than one at play).

Icebreaker combines the most appealing traits of juvenile fiction: an exhilarating imagination and an increasingly necessary imperative: empathy.

I wrote this of Museum of Thieves way back when: “Tanner created a cast and setting of delectable proportions for which I found I was ravenous in Museum of Thieves and will sure to be again in City of Lies.” Go ahead and transpose Icebreaker and Sunker’s Deep; Tanner is a satiating must-read.

Of note: Perfect for tracing the pathways of character development over the course of a plot, no “convenient” gaps to leap over here.

My reviews of Museum of Thieves and City of Lies

2 thoughts on “{book} never a nothing girl”