To the waters and the wild

With a faery, hand in hand,

For the world’s more full of weeping than you can understand.

The Secret of Kells‘ (2009; my review) Tomm Moore returns with another visually stunning and beautifully written film: Song of the Sea (2014).

From the very beginning of the film, I couldn’t stop with the exclamations. The style, color palette, direction, the weave of the story, the utter charm of its characters and their story.

The story is of the care for the last remaining seal child and Ben’s little sister. Saoirse is literally a thing of legend, a selkie who can save the magical world from turning to stone (rendered inanimate) and thus, destined for oblivion. While Saoirse has the concern of a grieving father and an interfering paternal grandmother, it is Ben who has been entrusted with the stories of his mother; the stories that can help Saoirse in their quest. However, first there are some familial issues to address.

The night Saoirse is born is the night Ben loses his mother to the sea and his father to grief. She is also a strong-willed little sister and prone to thieving. What is lovely in the film is how each child uniquely carries their mother’s legacy. The lore they are tasked to remember, and, indeed, enact is expressed in art (painted murals, map-making, sculptures), music (instrument, vocal), and storytelling (written and oral). 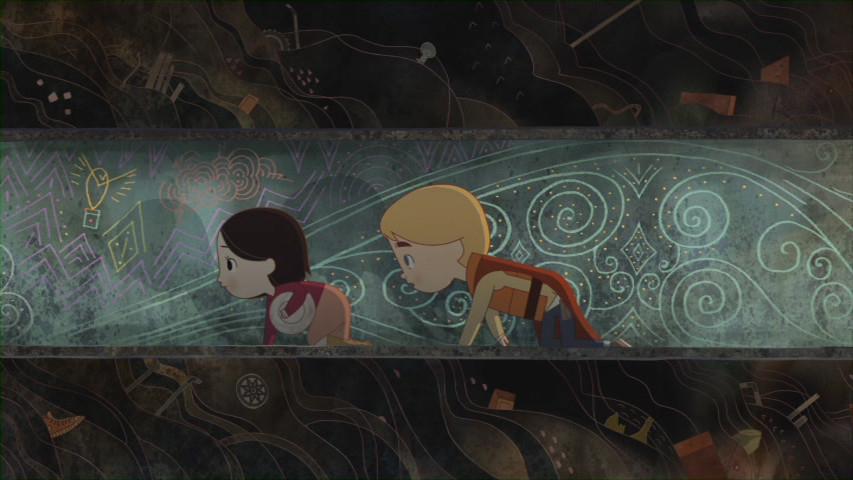 Echoes of the mythic are found in the real world. Granny & Macha and Ferry Dan & The Great Seanachaí (to name two) not only share familiarity in illustration, but the voice talent of Fionnula Flanagan and Jon Kenny respectively. The echoes thread conversations on the urban versus the rural; the sea and the land; the ancient and present; in the relationships of a parent and child. The story reveals an interdependence between the magical creatures of lore, and then a connection with humankind. In the film, humankind expresses a greater reliance upon the supernatural than the other way about. The iconography in the homes, communities, and surrounding wells (e.g. the holy well) is hard to ignore. The murals in the lighthouse home of Ben and Saoirse are not simple backdrops. Ben’s participation in (re)creating them is not without significance. Lore provides a sense of hope, and answers.

Song of the Sea resonates with familiar concerns in lines delivered by old-parental concern: “I know what’s best for you” and “children should be without care, without worries.” Do you? Are they? Ben wears his life jacket and frets when his sister is drawn to the sea (his little curses are amusing, his leash is hilarious), but the fear of risk ages them all. Saoirse begins to wither away, denied the wholeness of herself (her coat, the sea). Ben is left with the (dis)comfort of his memories. How is one to remember and yet let it go in order to heal. How does one bear the weight of a great sadness, a great loss. In the end, it is the confrontation, not the running away that returns the family to rights. It is in the strong characterization of the children that we are entrusted to lead the way.

The film hasn’t a lightness of heart (think Finding Nemo 2003), but it has all a charm that allows for the darker tones it carries.

Ben and Saoirse, in a race against time, are set on an adventure that returns them to the sea. Both children are tasked with fulfilling their mother’s legacy and reconcile relationships within the realms of lore and humankind. Song of the Sea is scenic, often humorous, and extremely perilous. Tomm Moore writes and directs a thrilling adventure that is full of charm and held breaths.

One thought on “{film} song of the sea”