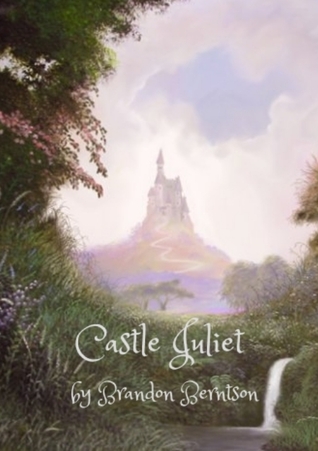 There are a few editions.

Alice and Jacky-boy are ten years old and the best of friends. For a year they embark on fantastic adventures, most born from Jack’s relentless imagination. As each season draws to a close, another one opens, revealing its own timeless magic and mystery – things Jack and Alice could have never imagined.

Castle Juliet reads as if Peter Pan and Wendy of Neverland were subjects in Mayberry RFD or on Walton’s mountain, Goodnight Alice dear. Goodnight Jacky-boy. I was expecting the charm in that first chapter to curdle into something either satirical or cloying. It doesn’t.

This is not to say that there are occasions in which one character or another is not over-the-top. Alice and her mother Jane can be a bit too angelic ala Dickensian standards. All the women exude a tantalizing domesticity, even the late appearance of Emily Lila Patrick. The men, too, are prone to being overtaken by sentiment. Threats of swooning and tearful expressions abound. A healthy dose of sincerity and a few hints of the occasional flaw rescue the novel.

Castle Juliet is an unusual experience in how the novel relies heavily (if not solely) on the cycle of four seasons as the means to open and close the story. The story arc: building a castle for Juliet is subtly suggested now and again–and not to our irritation, but pleasant surprise. The structure of time is what moves the characters through digressions and repetitions and elongated contemplations on one thing or another. The structure reminds us of the driving force of time, and how time carves space for life to linger a while over a mouth-watering feast or a contemplation of the magic in uncomplicated emotion and unfettered imagination.

The novel is character-oriented. The heavy use of dialog in this otherwise 3rd person narrative emphasizes the individual voice of the characters. Each child is unmistakably their own. The adults’ sheer goodness is always surprising (call me jaded), but they are the only ones to slip into representational models of one value/ideal or another. Grown-ups are also surprisingly non-threatening considering they are the adulthood of the novel. But neither are the adults the focus. The threats to Jack and Alice’s desire to stay young are in and amongst themselves.

The son of a repairer of shoes and clocks, small-in-stature Jack riles against the restrictions of time. He doesn’t want the Summer of unbridled adventures to end. Academic work fails to compete with the spinning of his imagination. Indeed, most of the numbers Miss (whom Jack calls Mrs.) Appleblom writes on the board prove confrontational.

“How come the five and three look so mean and scary? […] I think they look scary. The eight does too, especially the way you write it, Mrs. Appleblom. You put that little horn on its head. Makes it look like a monster, like a sidekick of the devil’s or something to terrify the minions. Or a fat, nasty snowman. The seven looks kind of mean, too; at least, he could, if he wanted, I guess. I haven’t decided. And look at the two. He looks harmless enough. An easy guy to get along with. But I don’t like thw way the five and the three are just sitting up there on the board. They look like they’re waiting for everyone to turn their heads, so they can take over the classroom” (7).

It goes on before the teacher finally interrupts. I love that Berntson is unafraid of lengthy dialog here.

Luckily, Jack has his Wendy in Alice who begins to tutor him. His only friend, she joins him on his adventures, challenges his decision to disallow pink lasers, and pummels him in a snowball fight. She invites him over for dinner, can’t run fast in her cowgirl boots, and refuses his blushing requests for a kiss.

Alice is the princess, and not by Jack’s design. She is the doted upon only child and only girl and for most of the time the world of the book will revolve around her. But then, the story is constructing a castle for Juliet. Can Jack convince her that lingering this side of childhood is worth the while?

“Her mind reached out. She might be small, but she was far from insignificant. At the moment, she was the eye of the universe, watching it unfold, a girl on a spotted horse loving everything she saw. […] She wanted to savor this perfect day and take it at her leisure. She would still it, freeze it in time. Her goal was to make everything—including now, her memories, and Jack’s fantasies–immortal” (158-9).

Alice’s family anchors them all, but it is Jack who is driven to build, to imagine and create. He inspires the changes that build the stories in Castle Juliet.

“If Alice didn’t know any better, she’d say everyone she knew had had a hand in its construction in some way or another. […] But in every aspect, it could only be Jack who’d come up with the idea, who’d put the entire thing into execution, laid the groundwork, the planning, supervised” (221).

A believable quantity of goodness can be found in community and imagination, such as is expressed with childlike fervor in Castle Juliet; less of any sense of a return to innocence and more of a childhood reign. It is in adulthood that we find the careworn need for domesticity and its middle class stability. Both Jack and Alice (and even Tork) manage to resist slipping into adult-like proportion; Alice being the most vulnerable. Peter Pan couldn’t (and wouldn’t) rescue Wendy from growing-up, but Berntson does in his freckled and red-haired Alice. Perhaps it is because Jack isn’t all that like Peter, even if blood-thirsty tyrant does come to mind… Jack is able to change and grow without compromising that which the novel values of childlikeness: to love without complicating sexual politics, to find time for creative play and invention, to be like themselves and remain somewhat unexpected.

Berntson explores the wholesome visage of childhood, and he builds a castle of found things, pieces oft discarded and half-buried. He revitalizes the notion of what can be enchanting about the fantasy novel. The affect isn’t flawless**. But I’ll go for heart in a novel over cold precision. I’ll take imagination over stricture. And I’ll pick the castle over the picket fence every time.

Of note: It was odd having a beloved character called Jezebel, but there you go, Berntson was difficult to anticipate.

*Two: Brandon is a friend and co-worker. He told me that he wrote Castle Juliet as a bid for something more wholesome after a stint of writing Horror fiction; he succeeded. It reads like a palette cleanser for the world-weary.

**Thirdly, and to be fair: some of the flaw comes from my desire for extravagance in design, more paragraphing, corrected grammatical errors, and a reigning in of setting. These feel like nits picked compared to such an unusual and refreshing experience.