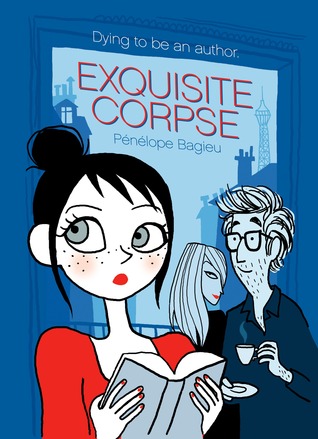 Zoe isn’t exactly the intellectual type, which is why she doesn’t recognize world-famous author Thomas Rocher when she stumbles into his apartment…and into his life.

Zoe doesn’t know Balzac from Batman, but she’s going to have to wise up fast…because Rocher has a terrible secret, and now Zoe is sitting on the literary scandal of the century.–Publisher’s copy.

Zoe is an amusing protagonist because she is atypical in literature; which is to say, she is strikingly familiar.

The translation from the French is good—not only of text, but of situation. Zoe is appropriately rendered as the wide-eyed young woman who desires more for her life. She is objectified on the job and lives with a loser of a man/lover. What she lacks in education/sophistication, she makes up for it in fortunate meetings. Two cute-meets later, Zoe finds herself where she couldn’t have imagined, yet proving she has the wiles to pull it off.

The rhythm or lack of artful transitions took some adjustment, but it suits the no-nonsense characterization; melodramatics are foiled. The brief leaps through time and the presence of those life-changing (plot-turning) meetings support the multiple meaning of the title. You’ve corpse (the dead) that is multiply “exquisite” (see OED), and you’ve “exquisite corpse:” a story created collectively. Perhaps you’ve played the game where, say, I would begin the story, the next person would add, and the third, and the fourth around a circle or in a zig-zag… Exquisite corpse is a form that removes the notion of storytelling as being a solitary act. Exquisite Corpse reminds us of the same. The publishing world involves critics and publicists and editors and readers/consumers, cover designers, the muse, etc. A book/story becomes the property of more than one individual person.

Where the “dead” writer is not without ego, Zoe actually is—she cannot afford one. Okay, there is the confidence of her youth and sexuality. Her “not exactly an intellectual type” antics makes her difficult to deal with at first, but her earnestness wins over the end. Yet however sassy and daring she is established as, is she ever more than just a body with its bundle of desires and desirability? A device… and is this a bad thing at all for the protagonist to be (can they be anything else?). I digress into my degree. I was as wonderfully entertained in a lighter reading; Bagieu’s work is capable of a great deal.

The bold color palette and black inked line work is placed in basic panel-layouts. Exquisite Corpse is deceptively simple (not unlike its protagonist and the relationships therein). Cool ghostly tones mark Zoe’s initial interactions with Tom. Is he a ghost? Yet as we learn more about Tom, the cool tones remark upon his characterization in another way.

Exquisite Corpse is accessible comic work. And I had to appreciate the decision to tell this particular tale in the comic medium versus the short story. The novel is a conversation on the high brow versus low (as well as privilege, choice, selfish desire, economics). And it is (all) couched in a humorous story I feel the Europeans really excel in telling. This European novel’s sensibility, sense of humor, and its twist are well suited for American audiences.

recommendations: Lit majors/literati; it is for those frustrated with the celebration/privilege of the Dead White Guy in Literature; it is also for those interested in a nice female graphic-fiction departure from the memoir.