Day Sixteen:  Brush of the Gods

by Lenore Look and Illus. Meilo So

When an old monk attempts to teach young Daozi about the ancient art of calligraphy, his brush doesn’t want to cooperate. Instead of characters, Daozi’s brush drips dancing peonies and flying Buddhas! Soon others are admiring his unbelievable creations on walls around the city, and one day his art comes to life! Little has been written about Daozi, but Look and So masterfully introduce the artist to children.–goodreads

An “Author’s Note” prefaces the story with a brief history of Wu Daozi (689-759) “known as perhaps China’s greatest painter.” Little has been written about him, and Brush of the Gods is “pieced together from references I found in translations of T’ang poetry and essays and from the many know facts about life in Chang’an during T’ang times.” 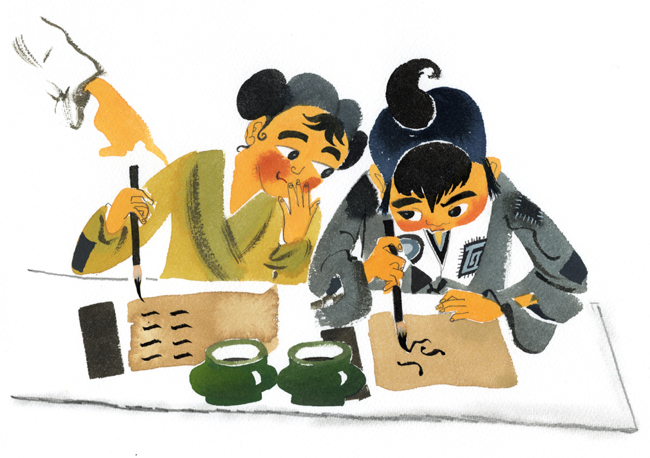 Even at a young age, the classroom was no place for Daozi. He moves his creations into the community, onto the walls, earning and generously dispensing food and wonder for the impoverished. His work becomes increasingly magical, and it is not only the city’s children that become enchanted—the reader is drawn into a sense of awe. Look is eloquent and So’s brushwork likewise. Rendered in watercolor, ink, gouache, and colored pencil, So’s artwork seeks to transport the reader not only into a historical narrative but into an understanding of how captivating art can become. 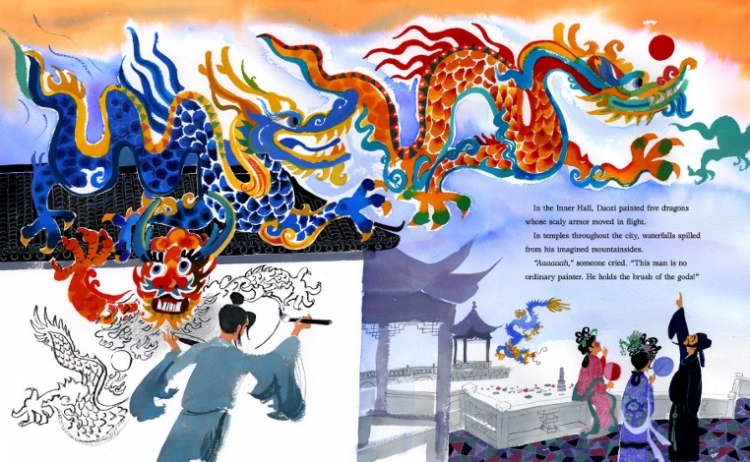 Brush of the Gods is a beautiful and inspiring story of a human artist’s restlessness that rewards him his imagination, daring, and charitable life. It took time and perseverance and belief for Daozi–as well as a healthy dose of rebellion; his story encourages the same for the young artist.

Lenore Look is the award-winning author of numerous children’s books including the popular Alvin Ho series and the Ruby Lu series. Her books have been translated into many languages. She lives in Hoboken, New Jersey.

Meilo So Country of origin- China/ Made in Hongkong/ Packaged in England/ Domiciled in the Shetland Isles/A tangled history/ Or a kind of freedom/ Many cultures make a world citizen/ Not a purist/ Methods and media change as required/ Pen and ink, brush drawing, gouache/ Subjects endlessly varied/ Magic, history, animals, humour, children, sex/ Or a quick sketch from life (via “about“)

{illustrations belong to Meilo So}

One thought on “bringing art to life”