“No matter what Nasreddine tries, it seems that someone always finds something to disapprove of. Nasreddine is a legendary character popular in stories told throughout the Middle East, and this clever story will bring him to a new audience. Accompanied by stunning artwork, this tale offers a gentle reminder to readers that it isn’t always necessary to listen to the world’s criticisms.”–goodreads

Nasreddine is worth picking up just to admire the cover and the artwork inside, but you should go ahead and read the delightful tale Weulersse has recorded inside. This one will go a long way for children and adults alike because no matter what young Nasreddine does, someone in the public sphere has something critical to say. Can such an old figure of wisdom in lore be any more timely?

Nasreddine is so small on the page, but always the most present that he does not risk insignificance—an important lesson to notice in and of itself. His father is marvelous and the world is rendered in such beautiful angles, colors and light. 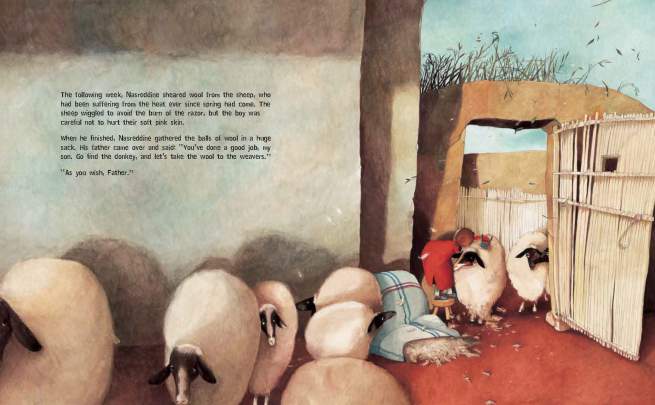 Nasreddine is just a gorgeous book from text to image and back again. No doubt someone will want to read the French, but I found no trouble with Merz’s translation. This one is an absolute must!

* There is a “Historical Note” at the close. It tells us that Nasreddine is spoken of in many stories throughout the Middle East as a man who has the “ability to offer both wisdom and delight.” I am enchanted by the decision to render him as a child learning from his own wise father. Imagine this child growing up to continue in his delight and wisdom.

Odile Weulersse is an accomplished French author of children’s literature, writing historical fiction mainly. All this, of course, after earning impressive degrees at a young age before lecturing on Film and writing screenplays for television.

Rébecca Dautremer was born in 1971 in Gap in the South of France (Hautes Alpes). She attended classes in the ENSAD of Paris and got a degree in graphic edition in 1995. She afterwards became a graphic editor and illustrator. A few years ago, she started to write books of her own. Now living in Paris with her husband Taï-Marc Lethanh and their three children, she also works for the press for children (Milan-Presse and Fleurus-Presse), school publishers, and in advertising.  Her picture books are very poetic, with a hint of humour. Bio via goodreads

Dautremer has illustrated these books: The Secret Lives of Princesses by Phillipe Lechermeier (Sterling 2010), music-cd book Swing Café by Carl Novac (The Secret Mountain 2010), and many, many more that have yet to be translated from French into English, but might find in Spanish. And I’m interested to see her picture book app Eleanor’s Secret.