Day Eight: Here I Am 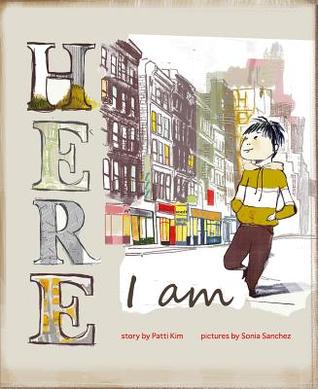 Newly arrived from their faraway homeland, a boy and his family enter into the lights, noise, and traffic of a busy American city. The language is unfamiliar. Food, habits, games, and gestures are puzzling. They boy clings tightly to his special keepsake from home and wonders how he will find his way. How will he once again become the happy, confident kid he used to be? –goodreads

Here I Am is a wordless picture book with a design familiar to comic books. A person can adopt their own language to the artwork, its sequence, and the emotions it evokes. In watching the child navigate the world about him, maybe they will see a bit of themselves in the story. The boy tries to see himself in this story he’s been thrust into.  A world of sentiment is captured in that single panel of the boy touching the airplane window with the cityscape on the other side, distant and darkened like the panel itself. 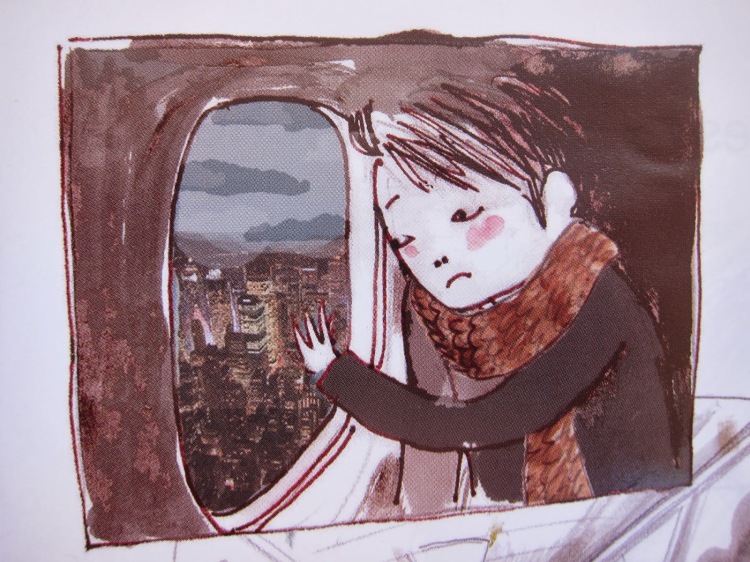 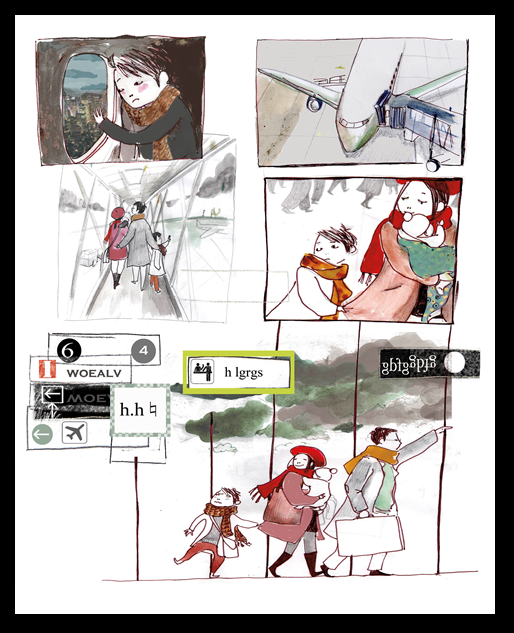 I love the sequence in the airport, looking at all the different faces and then stopping and looking down into the reflective polish of the hard floor. Patti Kim and Sonia Sánchez mind the details with just the right amount of attention. The text on the signs at the airport and in the city are a jumble of nonsensical letter combinations. The subway sequence lays frames over a transit map as the family appears mystified. The details are enough to express, but not enough to interrupt a compelling movement of panel and page.

Sánchez’s illustrations are loose line-drawing and layering of collage and pen. It’s lovely and apt. The story is one of movement, becoming, textured lives that layer and ink. I kept thinking of David Roberts, or Dave McKean’s Slog’s Dad. 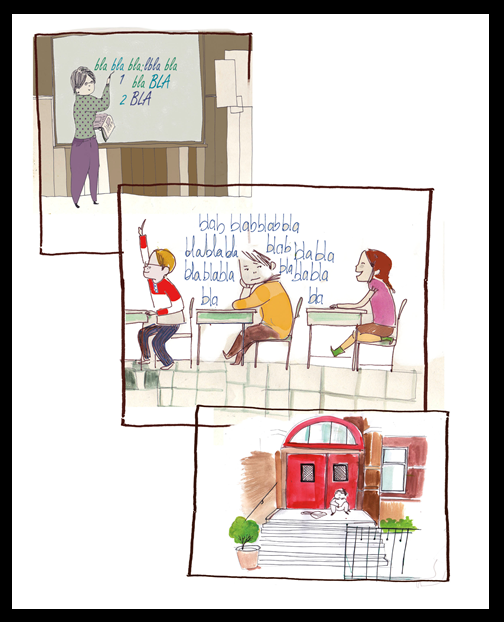 The boy finds comfort in a little red seed he brings from home, both memories and new life spring up from it against a cool almost colorless palette. The seed is a lovely choice for this immigrant family being transplanted onto new soil. But the boy doesn’t plant it, and will lose it. Its loss finally gets the boy to leave his apartment and go out into his neighborhood to see and experience this new life around him. We come to understand that it is often fear that isolates us. The boy begins to find himself in his surroundings. He makes friends. Nature springing up and out amidst the urban setting.

The movement in the story from the cold hard urban surfaces and hues to warm curving planes and colors of people and nature is quiet and effective. He finds life and he can finally declare, “Here I am” (the only ‘dialogue’) it is in seeing his reflection upon the surface of water, standing on a bridge—other significant symbols in the immigrant experience.

Here I Am is cleverly done. This picture book is remarkable in many ways, but brilliant enough in the telling of an immigrant story that you’ll want to consider this one out of and in the classroom setting.

Patti Kim Born in Pusan, Korea. Immigrated to the States on Christmas of 1974. Thought she was a writer at age five, scribbled gibberish all over the pages of her mother’s Korean-English dictionary, and got in big trouble for it. Has two kids of her own now. Lives with them and her husband in relative peace and happiness.—site’s bio She is author of A Cab Called Reliable: A Novel (St. Martin’s Griffin, 1997)

Sonia Sánchez “lives with her boyfriend and a sleepy-head cat in a blue house near the Mediterranean Sea. She paints with both traditional and digital brushes and likes a lot of texture in her work. She loves children’s books and her favorite illustrators are Quentin Blake and Fiep Westendorp. Sonia studied illustration at Pau Gargallo’s Arts and Design School of Badalona in Spain. Her illustrations have been published abroad in books, magazines, on graphic posters and textile designs for clothing.” Bio via Prospect Agency

One thought on “here you go…”