or is it The Lieutenant and his Delilah…?

Delilah Dirk and the Turkish Lieutenant (book 1) by Tony Cliff

“Delilah Dirk is the heroine of a series of adventure comics set during the early 19th century. Each story is completely self-contained, and they’re suitable for readers of all ages!” –site.

as for the and the Turkish Lieutenant:

“First, Delilah Dirk causes his execution. Then, she saves his life. Honour-bound to return the favour, Selim, the titular Turkish lieutenant, plunges into a world of danger and excitement. What will he sacrifice to repay his debt?” 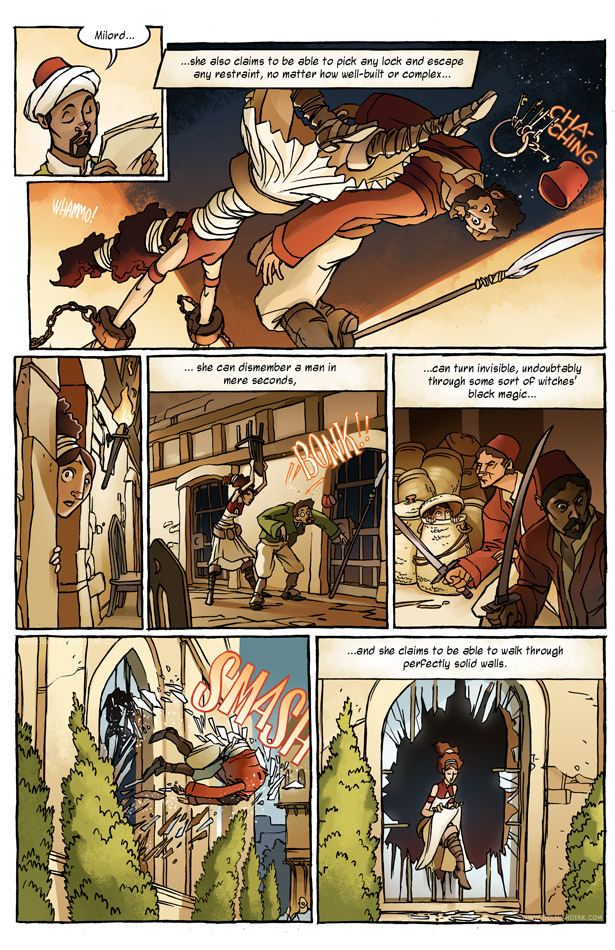 Tony Cliff renders 4 truly beautiful chapters of a Delilah Dirk adventure narrated by Selim, a gentle, tea-loving Turkish lieutenant swept up in her latest scheme: to rob a dangerous Sultan in Constantinople. 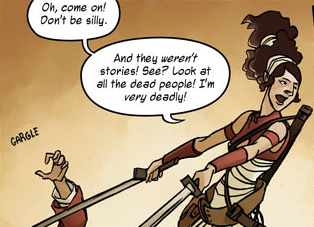 Using Selim as the narrator facilitates a wonderful introduction to Delilah Dirk. Raised an English ambassador’s daughter, she has traveled the globe and learned skills from various exotic locations that contribute to a completely daring bad-ass heroine of epic-Indiana-Jones-proportion. Selim is less the risk-taker of this unlikely pairing; and as far as the story goes, he is the more mysterious character. His own characterization pulls her back from becoming a caricature—if having such a heroine could be deemed caricature-esque.  Their individual personalities, senses of humor and adventure collide and complement in entertaining ways. He is gentle where she is ferocious; longing for comforts while she mans an airship; and their aptitudes differ. That the story is one of friendship is as unexpected as their companionship. 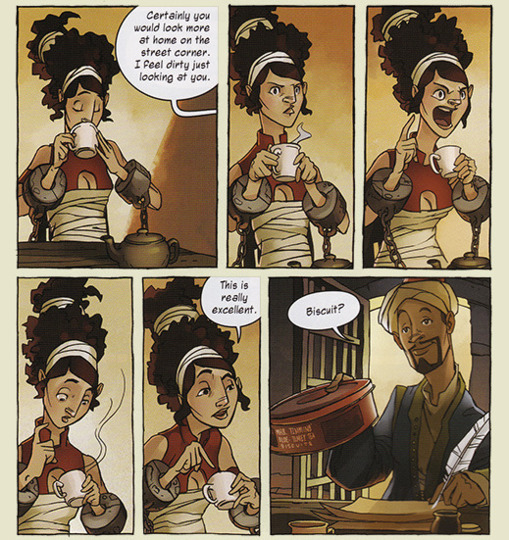 Delilah Dirk and the Turkish Lieutenant is as dynamic visually. It is flat-out pretty, illustration, ink, color, letters, its one of the easiest-on-the-eyes comics you’ll come across. And it is fluid, so much so that you eye-blink your way out of a magically real sequence that encloses one of the loveliest illustrations in the book—page 64. The energy is in the figure and antics of Delilah Dirk, in the expressive range of Selim’s visage , and the carefully paced frames racing and climbing across pages, looking for the restful vista of a full-page panel. There are tensions between the carefully contained and the explosive energy in the pairing of Delilah and Selim, and panel and page. The crafting is subtle and I had to recover from an infatuation with the art to re-view it.

Lovers of potentially foolhardy adventures will enjoy Tony Cliff’s beautifully rendered work, but I think those who also possess an eye for craft will experience the most pleasure. Delilah Dirk and the Turkish Lieutenant is an exciting comic you’ll not want to miss.

One thought on “{comics} delilah and her lieutenant”