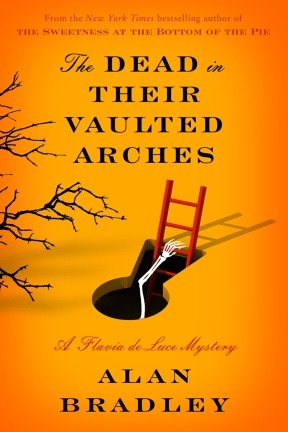 The Dead in Their Vaulted Arches

ARC thanks to Delacorte Press and NetGalley

“Young chemist and aspiring detective Flavia de Luce once again brings her knowledge of poisons and her indefatigable spirit to solve the most dastardly crimes the English countryside has to offer and, in the process, comes closer than ever to solving her life’s greatest mystery-her mother’s disappearance…” –publisher’s commentary

Harriet de Luce has been the mystery haunting this Flavia de Luce series and I’ve been holding my breath not since that tantalizing conclusion to Speaking From Among the Bones, but from the beginning with The Sweetness at the Bottom of the Pie. Harriet’s absence has stained everything: the grieving husband and distant father (the Colonel); the competition between motherless daughters (Ophelia, Daphne and Flavia) with the youngest left with only her mothers looks and mind, but no real memory of the woman who birthed her; and then there is an estate (Buckshaw) left with no known Last Will and Testament. Was Harriet a too adventurous young mother, careless of her husband, children, and inheritance when she went off to climb a mountain? Or is there something more to it?

We learn about what really happened—to a lot of people in The Dead in Their Vaulted Arches. How did the Father and Dogger meet and what is the nature of their relationship? As if I didn’t already love Dogger to pieces. The course of the series has evidenced a deep love between Flavia’s parents: prepare for a terribly moving scene that makes his grief all the more stirring. Will the sisters come to peaceful terms? okay—let’s not be greedy.

There is some bow-tying in a book that would solve Harriet’s disappearance. But if you are looking for neat and tidy…  That consistency in the characters and their relationships we have come to love, has and continues to translates into messy feelings and complicated turns. For one, we still have Flavia struggling to find her place in a family where she receives the most affectionate parenting and siblingship from the servants and Dieter. In that audacious manner Flavia has become known for, she is going to attempt a rather grand scheme in The Dead in hopes to win her place once and for all. That is, if she can do something about that pesky and familiarly precocious cousin of hers that has come with Harriet’s return.

Natalya did not care for Undine and I cannot disagree. I find amusement, however, in just how similar in description she is to Flavia. Child-like, genius, sneaky, underestimated… But Undine is not the only distraction for Flavia, all sorts of people are littering the landscape and the mystery, old and new. The novel is no less ambitious than past books, but Bradley injects a turn that wends its way backwards through the series in an effort to fill in niggling details. It works, but will you be happy with where Bradley goes with the de Luce family?

Flavia has softened, become less heartless over the course of the series, and we see this growing-up girl in this finale. I sort of miss the morbid vengeful thing of the earliest books, but her emotional education is an appealing aspect to the story arc.

I read the Advanced Readers, Uncorrected Proof, but I do not imagine the ending will change all that much–which is too bad. I can get excited by the possibilities that raced through my mind with that one, how it translates into the spinning of tales, of futures, I’ve no guarantee of ever seeing. I do like what it all means for Flavia. I like that ending. But it is actually that very final lines that I wish I could get your opinion on, because it isn’t just that it rings a wrong note, it suddenly shifts the center of the Flavia de Luce Novel and that is not a good choice.

The Dead in Their Vaulted Arches involves a handful of endings, knotting those bows, exiting stage right and left. Leading up to them, we have the chemistry, visit the personalities of Bishop’s Lacy with Gladys to transport us there, Dogger’s well-timed presence, tense family meals, and the high drama of a family grieving what it’s lost and the lies that have perpetrated the crime. At the center of it all, the brilliant and determined Flavia de Luce who will finally come to realize her place–but only after she solves the mystery behind her mother’s disappearance. It shouldn’t surprise you but it is going to be quite a bit heartbreaking and just a bit gruesome.

recommendations: by this point, you have to read all the previous books as this one responds to the over-arching characterizations and plot. This is a great historical fiction/mystery series for middle-school and up.

my reviews of books: #1 The Sweetness at the Bottom of the Pie; #2 The Weed That Strings the Hangman’s Bag; #3 A Red Herring Without Mustard, #4 I am Half-Sick of Shadows , & #5 Speaking From Among Bones (pending)

One thought on “{book} the dead in their vaulted arches”