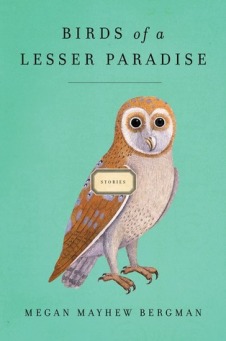 Birds of a Lesser Paradise: Stories by Megan Mayhew Bergman

purchased at a Library sale some time back with a vague memory of reading a positive review from a trusted source.

Please:  If you are not a reader of short stories as a general rule, bear with me on this one. And if, like me, you whiff anything that could be classified as “women’s fiction” and you reflexively re-shelve, consider making this one an exception. While Bergman’s work is hardly simple, it is not elusive. It may be challenging.

From a prizewinning young writer whose stories have been anthologized in The Best American Short Stories and  New Stories from the South comes a heartwarming and hugely appealing debut collection that explores the way our choices and relationships are shaped by the menace and beauty of the natural world. […] As intelligent as they are moving, the stories in Birds of a Lesser Paradise are alive with emotion, wit, and insight into the impressive power that nature has over all of us. –publisher’s comments

“As intelligent as they are moving” is an aspect quickly noted as we follow one female protagonist after another in an exploration of what is natural and unnatural in their settings and relationships. I tend to expect that in a collection of 12 stories there will easily be one or three I could do without; not so with Birds of a Lesser Paradise. I found myself more deeply impressed as I continued reading–even as I began to anticipate character types, themes, and narrative structure; even as a sense of loneliness and its odd accompaniment of contentment settled in with each quietly punctuated concluding sentence. The stories are as lovingly complicated as the females who inhabit them, and I found myself trying to preserve line and after line to share with you.

The book’s epigraph: “We will now discuss in a little more detail the Struggle for Existence.” Charles Darwin, On Origin of the Species.

[1] “Housewifely Arts” (1-25) With her 7 year-old child in tow, a woman is in search of the bird whose voice has captured the mother she lost the previous Spring; really she has the need to reconcile the motherhood of past, present, and future. The observation of time and the generation is especially lovely here; though the narrator was sometimes hard for me.

“The things my body has done to him, I think. Cancer genes, hay fever, high blood pressure, perhaps a fear of math—these are my gifts. I have to pee, he says. I release him, let him skip into the fluorescent, germ-infested cave, a room slick with mistakes and full of the type of men I hope he’ll never become.” (5-6).

The disintegrating spaces and relationships and the longing to hold on to some part if not all, begins in the first story and continues with a beautiful aching throughout the collection.

[2] “The Cow that Milked Herself” (27-35). A nameless “I” is expecting her first child. Preoccupied with the anxieties of anticipated indignities and competing for the attention of her dedicated Veterinarian husband, she comes to find warmth and confidence in being a part of nature.

You begin to really understand how good the author is with using science in metaphor, to say nothing of just delivering it so eloquently. And you’ll start to note the number of Vets, biologists, and outdoorsy characters from this point onward. I adore this story in particular for the way in which it relates the vulnerability of needing another person’s love and understanding; she revisits this time and again.

[3] “Birds of a Lesser Paradise” (37-59). “I was a thirty-six-year-old single woman living in a poor man’s theme park, running birding trips into the swamp. […] For the Most part, I was happy” (41). The “poor man” is her father whom she adores. As for her life and happiness: changing landscapes in response to economics or age or the indefinable lives of others intersecting are matters of contemplation and affect the landscapes of one’s dreams. Autonomy does not come without desire for companionship of one sort or another; nor does it come without strings, familial or otherwise.

The first lines of the first story is not the first declaration of independence in the collection. And many of the stories find women preferring, if not content with, maintaining a “single” status.

[4] “Saving Face” (61-76). Lila is a Veternarian who values her independence and her pride, needing to be beautiful, not pitied. The scars are not the most heart-breaking results of Lila’s accident, but the confrontation with beauty, culture, and self-perception. “Now that her face was altered, she felt she was walking through life relying on a different set of tools” (66). This one is a sad one, somewhat despairing, and reliant upon what few romantic tendencies I own. Not to be missed.

“I’ve been told self-righteous people always have it coming, that  when you profess to understand the universe, the universe conspires against you. It gathers and strengthens and thunders down upon you like a biblical storm. It buries your face in humble pie and licks the cream from your nose because when the universe hates you, it really hates you” (77)

Finding out you’re pregnant as a believer in and lover of the founder of a nonprofit interested in returning the planet to nature by freeing it from the human parasite illicits the sort of reaction with which our narrator begins the story. There are so many lines from this one…and my notes…“I wanted to become what I most admired, what now seemed most real to me. I wanted to be that exalted, complicated presence in someone’s life, the familiar body, the source of another’s existence” (91). The image of a whale, the use of the biological, was absolutely wonderful. Activism meets traditional values in the lives of intelligent women who have always sought a balance with nature. This story is a thought-provoking one.

Legacy, the human ego, hope and life in the face of an unknown; nature’s persistence and our belonging in relationship with nature.

[6] “Another Story She Won’t Believe” (101-116). First lines are particularly noteworthy in this collection, and this story is an exemplar. Just the same, I will skip to page 105, “it occurs to me that sometimes we make homes where we do not belong.” Our narrator, a recovering alcoholic and an estranged mother, is only one of the displaced we find in the story. When the narrator thinks about her daughter, ‘what will she do when she finds the world is still spinning’ (114), that life does continue on, you know the story is wondering this very thing of its narrator as well. I’m still wondering over this question, the author recommending our own exercise of imagination, leaving us as she does. I suppose the story would be depressing if not for its matter-of-fact telling, its oddities, and those fantastic references to old cinema film stars.

so, you’ll have noticed a trend in excellent titles, first lines, and closings. And you’ll notice a tension in realities and the stories we tell ourselves—and how the embracing of each my have a place.

[7] “The Urban Coop” (117-132). The narrator is not getting any younger, nor is her much older partner, and she’s thinking she might like to express maternal-love to more than their dog and the homeless “boys and girls” who work the urban coop she and her partner founded. There is guilt, a worry that she is capable even while we see that she is. There is also a generational component, not only between a young woman starting out in the world and one who has been at it a while, but between the idealist-intention/ethic of their generations.

This isn’t what I expected, Sam [the young woman] said.

I lied. It will be if you give it time, I said. Hard work can turn any old dump into a fertile paradise. (123)

This section appears in the middle-ish of the story, but it illuminates major conflicts in the story: expectations, hard work’s ability to transform, fertility…

The breadth of age, experience, and lifestyles of the women in the collection is lovely, and that we can begin to establish shared anxieties between them all.

[8] “The Right Company” (133-148). She is looking for a place to be happy, to belong, feeling a bit of an oddity and not just because she is new to this little coastal village. She has been estranged from her husband for months and has made a male friend who is just that, a friend. What is the place of nostalgia, of kept distances, and what does independence looks like when interdependence has always been the way of it? Who is responsible for what actions? What does rescue come in the form of?

“In towns like these, I thought, there are no perfect rescues. You go down with your own ship” (148).

Who rescues whom, and when is it a community sport or up to the individual…is the latter possible?

[9] “Night Hunting” (149-164). This is a mother and daughter story and their encounters with the wild, deadly, unknown, the rare, the hunter and the all too soon. Nature and motherhood is brutal. It is chilling and good luck at that attempt for some sort of straightforward allegorical read.

[10] “Every Vein a Tooth” (165-183). Gray leaves her to her Victorian house full of decrepit pets aka animals she’s rescued. He can’t take it anymore and the story doesn’t blame him, kind of. It reads a bit married-with-children (not the television show). It is said that pets give love unconditionally, but are they really without demands? And we get a comparison between urban naturalists that is ever interesting. I adore her treatments of the subject of activists and survivalists. The narrator has to decide how strongly she feels about her cause.

“A friend once told me there were 2 kinds of urban naturalists. The McDonald’s-eating semi-hoarder animal activist, and the armchair conservationist with bloodlust” (172).

Those motherhood themes throughout the collection, of self-sacrifice, of legacy and purpose, are front and center here. As well is that sense of our place in nature, as animal, as nurturer…

[11] “The Artificial Heart” (185-204). A story set in 2050, “I” is caring for an aging parent with her partner and no children of their own in a world where they live with the carnage of a stripped and mutilated landscape. We get the relevancy of the aged, bodies that have been mined, too. Love and knowledge amidst survival are key conversations that carry us back to the now, to live deliberately, with a mind on the future and those resources that we will come to depend on—including our children, blood or adopted.

The notions are rarely if ever preached. What is lost in the balancing action hardly comes off as so cleanly heroic; it is framed too personally for that—usually; depends on how you feel about the decisions made, where your own values lay.

[12] “The Two-Thousand-Dollar Sock” (205-221). “Give up the illusion of control” (217). “I “ is a wife, mother, dog-owner, experiencing difficult decisions, much of them to do with finances. Survival looks different here, much more domestic and familiar to those readers who rarely camp in tents, let alone live rurally. The narrator observes in sections the significant changes that have been visited upon all the landscapes a woman experiences: her own body, her lover’s, her child’s, pet’s, home…

How is one to be fearless and yet live with very real responsibility?—we’ve gotten this throughout the collection, but as the attachments to the narrator varied, so did the replies. Priorities lead to some painful outcomes, yet for others it is a liberating motion. Regardless, all live with fears, with frailties, and yet all express determination, courage; it is seen in our reflection of  and relationship to Nature.