…seriously, don’t crawl getting there. Run! and maybe hurdle a few objects along the way.

I use the present tense on purpose because you watch them at least once a year. You know that hurdling fences gag does not get old—and so does The World’s End. Besides the recurring jokes, the bromance, the English, the Western, the themes, settings, angsts the trilogy is revisiting in each installment, what is especially fantastic in the 3rd is the switch between Simon Pegg’s and Nick Frost’s character types; yes, that stroke of genius is my take-away.

Edgar Wright’s direction means clever cutting, excellent sound (not just music), and the choreography in physical movement and narrative—the fight scenes, getting characters from one pub to the next…One of my favorite moments is that “musical” number after the 5 leave the pub realizing that maybe their lives might actually depend on finishing the crawl; think that ridiculously silly pool-stick-beating-zombie number in Shaun of the Dead. 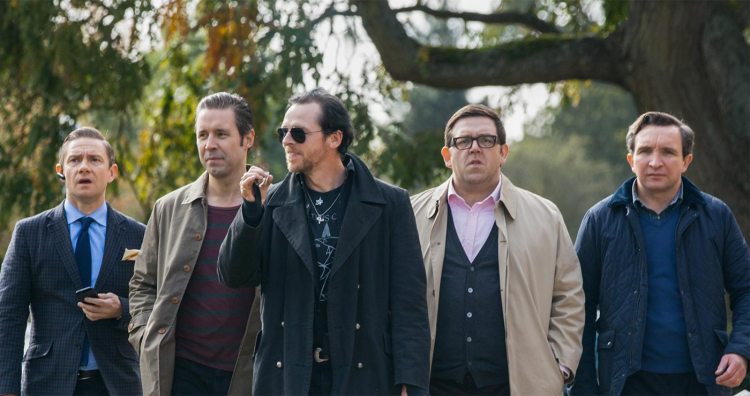 2:  Your coming of age isn’t actually a John Hughes film, but the decade after…

Sean (a 1994 alum) sang along with every song. Granted, how many other East Texans came of age with a Brit’s soundtrack other than Sean. Even so that opening sequence (patterned off of late-80s, early ’90s MTV) and Gary King’s (Simon Pegg) wardrobe and middle fingers are all too familiar. And sure, there are key themes and figures (such as King) who are familiar to everyone’s youth, but dammit! I get tired of historical fiction set/made in the 1980s.

(Show of hands if you (like Sean) recognized The Sisters of Mercy on cue.)

3: You know the Cast will be (and is) marvelously smart and funny.

Simon Pegg is magical. He can be an absolute ass and yet manage to be incredibly charming at the same time. The utter abandonment of vanity helps. Then there is his ability to cry well, oh, and apologize whilst maintaining that spark of mischief. Nick Frost (Andy Knightly), Paddy Considine (Steven Prince), Eddie Marsan (Peter Page), and Martin Freeman (Oliver Chamberlain) not only make up King’s court (note the character last names) but they are the childhood friends grown-up—and while I initially wasn’t sure what to expect chem-wise between them, they play really really well together. And as for befitting roles? brilliant.

I still think nothing that has been suggested in the last 10 minutes beats ‘smashy smashy egg men’.—Andrew Knightly (Nick Frost) 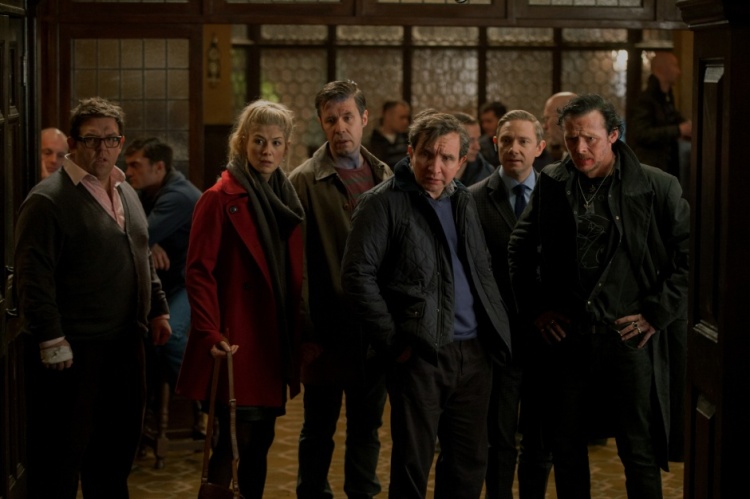 4: Because you know that being the Grown-up can really suck sometimes and you could use a comedy that will actually make you laugh about it.

Gary King isn’t the only character in crisis. No, the film interrogates a particularly problematic issue with adulthood : the denial and concealment of messes. Messiness isn’t mature. Mature is having your shit together and off the lawn. Is it, really? In the film Mature has resulted in the “starbucking” of the pub[lic house]—and for the greater good of what exactly? It is an interesting question.

Not that growing up is all bad: One of my favorite grown-up moments to no one’s surprise is when Steven tells Sam Chamberlain (Rosamund Pike) that he will leave his young fitness instructor girlfriend (whom he boyishly bragged about earlier) if he had the slightest chance of being with her. The other moment vying for that spot involves Sam as well, when she is educating Gary on the that was then, and this is how it is now.

For all the drinking done, I wouldn’t show up drunk to the viewing–the film will shame you for it. The pints, the time together, you’ll not want to miss what Wright & Pegg are doing here.

You grow up to get wiser, to become someone, not to show your aptitude for becoming sheep—or a “blank,” or a “smashy smashy egg man.”

The Golden Mile, the Cornettos…actually getting to close the deal, confront that bully from the past, as well as that romantic crush, find some reconciliation with a friend’s betrayal and, of course, finishing a good pint. How does one mark progress if not actual arrival? How does one actually become of age? there is something about letting go, resolutions, and The World’s End can be a bit silly, but it is considerate. there is so much pressure to become, to finish, but what if you arrive to find the “finished” product not what you were promised, or as it was promised (and thus terrifying)…

I was eager to see what an ending to this type of trilogy would look like, and I was pleased.  that said, the closing of the film probably held the least appeal for me, though it is perfectly in keeping with its choice of genre (classic sci-fi). the speech with the Network was dangerously close to over-done, the closing narrative oozing a bit with cheese in the better world vision department. That ending has to do with minding the genre—which, no doubt, has all the sci-fi genre finishes.

A.O.Scott’s NYTimes Review “Last Call for Friends to Grow Up” in which he concludes:  Edgar Wright’s “project is childish fun with adult language and grown-up costumes, and he executes it with energy and precision. The Cornetto Trilogy is named after a popular ice cream treat, and the buzz of “The World’s End” is more like an antic sugar high than a reeling, drunken stupor. There are no headaches, dry mouth or crushing shame at the end — no “Hangover,” in other words. I’ll drink to that.”