Starry River of the Sky by Grace Lin

The moon is missing from the remote Village of Clear Sky, but only a young boy named Rendi seems to notice! Rendi has run away from home and is now working as a chore boy at the village inn. He can’t help but notice the village’s peculiar inhabitants and their problems — where has the innkeeper’s son gone? Why are Master Chao and Widow Yan always arguing? What is the crying sound Rendi keeps hearing? And how can crazy, old Mr. Shan not know if his pet is a toad or a rabbit?

But one day, a mysterious lady arrives at the Inn with the gift of storytelling, and slowly transforms the villagers and Rendi himself. As she tells more stories and the days pass in the Village of Clear Sky, Rendi begins to realize that perhaps it is his own story that holds the answers to all those questions.

After that copy, need I say more? besides my witness that what it has to say is not in the least bit misleading. Starry River of the Sky is a stunning companion to the exceedingly wonderful Where the Mountain Meets the Moon. Those lovely inclusions of stories within the greater story is as well done, and the interplay with the greater story is as flawless. The rhythms Lin finesses in Starry River never break stride for the insets, where a character relays a story and a title with images is formed and the font changes for the telling. The sweetest part of the novel is how one comes to realize that those inhabiting the book are creating a fantastical story of their own, becoming a part of a folk loric legacy their culture so lovingly embraces. The morals found in the tales are pieces that are woven into a novel that would capture a moral of its own, using the collection of “fascinating characters” Lin has collected and imagined. 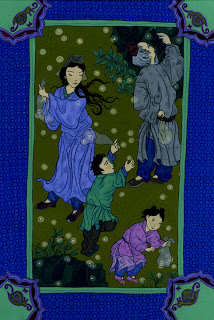 Starry River of the Sky is a story of lost objects and subjects. And why they have gone away is a mystery to unfold. Who is Rendi? Where has he come from? and why did he run away? What of the innkeeper’s own son? Lin is both graceful and concrete with her imagery when relaying the situations of her characters as well as developing the characters themselves. She does this quickly, adept with packing complexity into a lightly paced 289 pages (to include illustrations). The stories told do illuminate quite a bit, and we fully understand when Madame Chang tells Rendi that “when people tell stories, they share things about themselves” (264).

“It is better to light a lantern than bemoan the darkness” (87) Madame Chang quietly shares in a moment, but the idea saturates the novel as she comes to demand Rendi share his own stories and seek the solutions that will relieve him of his troubles.

Rendi embodies the kind of anger and restlessness found in the people, stories, and spaces that occupy his surroundings.

“Mr. Shan,” Rendi finally said, as they reached the front of the house, “what did you mean about the moon?”

“The moon?” Mr. Shan said in his vague way. “The moon means peace. It is the image of harmony and peace.”

Rendi tried again. “You said without the moon, you forgot everything. And you said that you didn’t have a home.”

The absence of the moon signifies more than just who/what is missing, but the potential holding its breath for a hopeful ending—a potential inseparable from Rendi more than any other character. And yet there are plenty of characters the Reader will become attached to, ugly toad included. Seeking and finding the lost becomes as paramount as maintaining a healthy balance, and desiring the happiness of another over the self.

“Rendi,” Madame Chang said, her calm eyes bringing him to stillness, “sometimes the best decision is a painful one, but it is never one made out of anger.” (187)

I adore how tangible Lin makes the mythic seem to the reader. The affect of cultural & familial legacy features prominently. They live amid the evidence of great stories past, and they continue them, even participate in them (e.g. snails). And the impossibility of the stories become probable, which leads toward an inventiveness, a creativity, that makes reading Lin’s books so inspiring and pleasurable. Still, for all the richness of lore Lin provides, the simply stated is just as welcome–“The secret to peace is forgiveness” (249) — even as it can be just as elusive in how one is to move that particular mountain or replace the moon to its rightful place. However peace may be accomplished, Lin is nothing if not empowering of the young in Starry River of the Sky.

of note w/ recommendations:  Starry River of the Sky does not feel message-y in actual experience. and it also has some great juvenile characterizations, humor, and some exciting action scenes; even a few gross-out moments, come to think of it. So this is a GREAT read for boys & girls of the grade-school set. It is the kind of entertaining read that also happens to expose the young reader to really good writing and storytelling technique.

If you’ve not read Where the Mountain Meets the Moon, please do. [my review.] And if you love Lore/Myth (faerie, folk, or however you like to describe them), these are books to own.

3 thoughts on “{book} starry river of the sky”