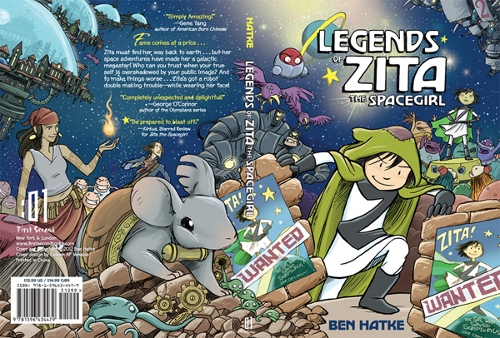 Zita’s exploits from her first adventure have made her an intergalactic megastar! But she’s about to find out that fame doesn’t come without a price. And who can you trust when your true self is being eclipsed by your public persona, and you’ve got a robot doppelganger wreaking havoc . . . while wearing your face?

Still, if anyone can find their way through this intractable mess of mistaken identity and alien invaders, it’s the indomitable Zita, in Legends of Zita the Spacegirl.—publisher’s comments.

Zita is still looking for a way home, and she may have found an offer she can’t refuse—or rather, she would have had she been the one with whom the deal was made instead of a robot who takes her form and identity. But what is ever as it really seems?

Hatke introduces a few new characters a circus Ringmistress Madrigal (w/cool tattoos) and a giant cat Glissando, providing intriguing shadows of Piper’s and Pizzicato’s respective pasts. How had the two of them come to who they are? But then, Zita happened into her own hero status, an identity that can easily be misinterpreted with a few unfortunate turns in events. As Madrigal tells Zita, “I think you’re like the rest of us. Just trying to hold things together while you find your way. But I also think the role suits you.” 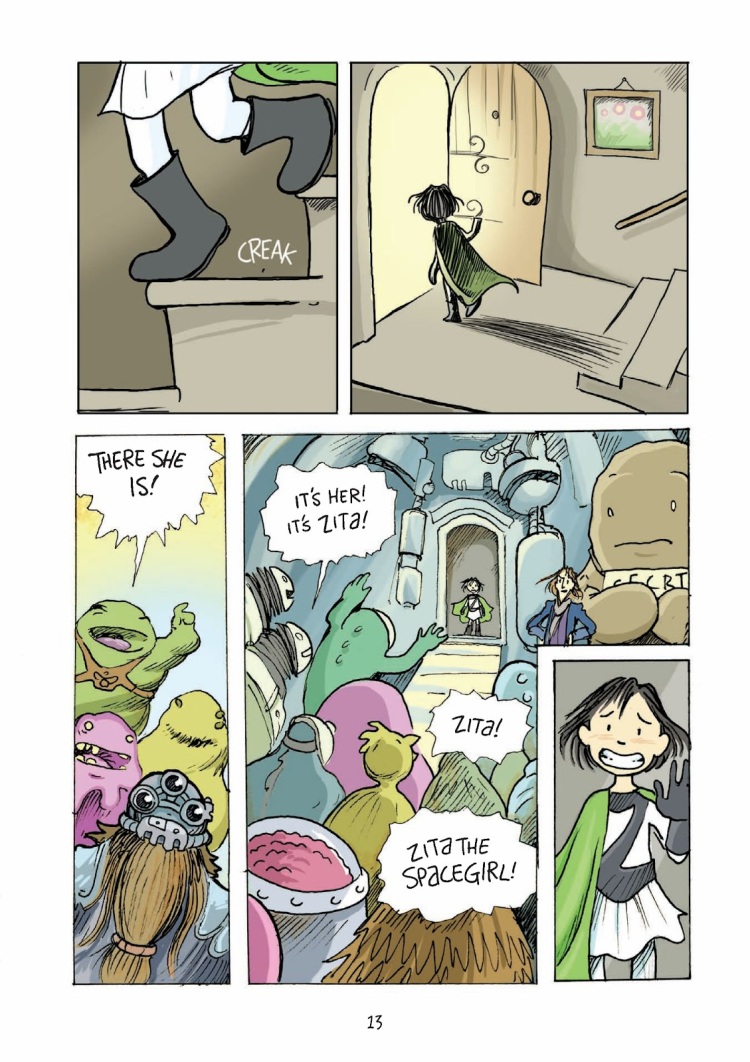 So as Zita, in the first book, falls into this crazy place in outer space that is rife with strange alien creatures that sound like everyday joes from the northeast, she continues to find herself in the position of choosing to help or hide. And when she chooses to help, the hero she is, how will she succeed against the seemingly impossible?! Will she defeat the evil heart creature? yeah, you heard me correctly. Ben Hatke has an amusing sense of humor and horror in the creation of his aliens. I liked the sentient ship, reminds me of Farscape, only more kid-friendly. 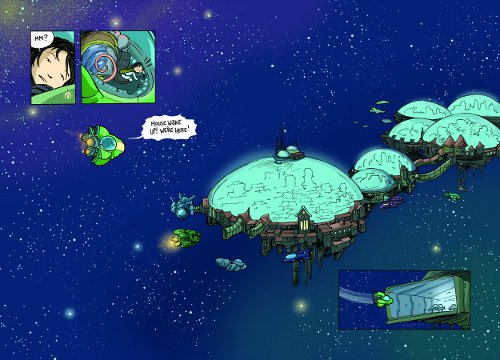 Fast-paced and full of color, Hatke and Zita takes us on a fun intergalactic adventure. Zita is still looking for a way home, but she has a few things she needs to do in the next installment. Not everything goes swimmingly, and we have a few cool sounding new characters to explore alongside those previously introduced. Hatke has a light hand with the story which should satisfy Zita’s young readership. 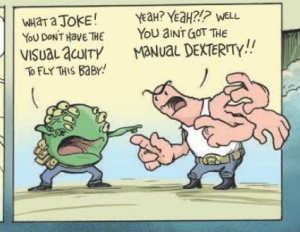 Zita the Spacegirl is a really good series for young readers, girl or boy, who love a good adventure—which should cover just about every child out there. Light of text, and eloquent with the silent and cinematic, Zita is still not difficult to read. Textually, Hatke translates accent into fun phonetic spelling and keeps the language accessible and expressive (in lettering). His use of wonky frames, sound effects, breaks, describe a comic that is not hard to follow and emotes rather effortlessly to both the conscious and subconscious.

recommendations: ages 6 or 8 & up, boys & girls, comic-reader or no (will generate interest in the non-comic reader, so nicely done are the illustrations/color); for lovers of Kazu Kibuishi’s work (Amulet in particular)—you can find contributions to Explorer by Hatke; also fans of Jellaby, I should think and Ghostopolis. Zita really is a must for your 8-10 year old.

my review of the first book: Zita the Spacegirl

And the wonderful breakfast interview 7 Impossible Things Before Breakfast hosts.

4 thoughts on “{comic} legends of zita the spacegirl”