{The Evil Snowman by Zeeksie (aka Serj)}

Before we move onto Winter cheer, R.eader’s I.mbibing P.eril VII has come to a close. 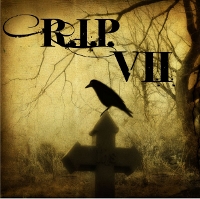 I hope next year to indulge myself much more than I managed this year. But I did enjoy myself and found many a great reading recommendation or screen suggestion these past two months. Plenty that will not wait for next year’s RIP.

So what did I manage this year?

books, noticeably all Juvenile or Young Adult. A Monster Calls by Patrick Ness (& Siobhan Dowd); Mister Creecher by Chris Priestley; Skary Childrin and the Carousel of Sorrowwritten & illustrated by Katy Towell; Chime by Franny Billingsley;  Long Lankin by Lindsey Barraclough (review pending); I did read some Edgar Allen Poe and Nathaniel Hawthorne, but those would be less “review” than usual.

screen meant to watch more but we didn’t. It was enough to keep up w/ television—which does include Bones and some episodes of Grimm.  North by Northwest (1959), dir. Alfred Hitchcock;  Wallander, series 3 (2012), w/ Kenneth Branagh, BBC;  Prometheus (2012), dir. Ridley Scott, review pending but it was creepy even if it didn’t have that awesome soundtrack from the trailers.

participated in the “A Grave Tale” activity

Sean and Natalya watched and read. Natalya watched some Doctor Who as well as North by Northwest, and some Grimm. Sean watched Cabin in the Woods (2012) dir. Joss Whedon at least once along with all the afforementioned.

Sean read Sacre Bleu by Christopher Moore (a lot of hilarity, but mystery and distress as well). Natalya enjoyed Anna Dressed in Blood by Kendare Blake (which I started but it had to be returned), In a Glass Grimmly by Adam Gidwitz, Poe’s “The Tell-Tale Heart” and “The Raven”…not sure what else because she moves through things so quickly—even that massive tome Susanna Clarke wrote called Jonathan Strange and Mr. Norrell with which she is nearly finished.

So that is it for this year’s RIP! Hope you experienced some good reads and found more than a few books to try.