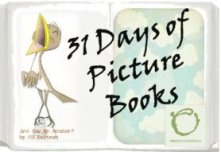 I am fairly new to Lane Smith and we’ve only met over a few books featuring very head-strong young ladies. He has a noticeable a knack for depicting them well. Judith Viorst’s Lulu and Florence Parry Heide’s Princess Hyacinth are neither cute nor hideous. They carry the angles he gives them well and “flounce,” “bounce,” and “squee” are not words that come to mind when they express themselves!

A grade-school girl Katy takes us through the day in the life of an American president—well, not any American president, but herself: Madam President. “Katy skips the hand-wringing and never questions whether a girl could become commander-in-chief — instead, she behaves as if she is president already, fulfilling official duties at home and in school.”—Publisher’s Weekly

Madam President begins with Katy addressing the Reader (and/or listener) from her bed having already started her day reading  a book titled The Presidents, “A president has many duties.” She is very comfortable in her role as Madam President as she takes us through her day. She is nonplussed by photo-ops with bewildered boy scouts (the troops?), peace treaties to negotiate between cat and dog, and dealing with crises (aka the “Disaster Area” that is her room). Dressed in a smart pantsuit, from one task to the next she leaves little American flags in her wake. My favorite two-page spread is when we are introduced to her cabinet, “A president must choose a capable cabinet.” I am a fan of the idea of having a Secretary of Naps and a Secretary of Fantasy; the sock monkey and winged unicorn were nice choices for each. There are a lot of silly moments (“A president must tackle press conferences gracefully”) and it is a fun way to approach the subject of just what does the President of the United States do? and What do we expect them to do?

Katy is very passionate in her role as Madam President for the day and on the subject of presidents in general. There are books, posters, paintings, and sculptures of past presidents throughout. And there are references to other powerful American leaders as well. A copy of The Biography of Frederick Douglass lay on her floor beneath the Secretary of Secretaries and a book about Harriet Tubman is peeking out beneath her bed. There is an image of Susan B. Anthony on Katy’s wall, and she declares her importance as president atop a bust of Eleanor Roosevelt.

At the end of the day, Katy doesn’t return to being a little girl who gets tired and was merely imagining a day as if it were “typical childhood play pretend.” She didn’t start her day as anyone but the Katy we see throughout. So when the ambassador from Freedonia arrives and she’s already tucked into bed with the comic section of the newspaper, Katy suggests he see the vice president, because “sometimes even a president gets pooped.” As the color palette and all the strong geometric structures suggest, for all the play, there is plenty to take seriously. Madam President is brilliant, and a must.

recommendations:  Madam President is fun and inspiring, and a great companion to Kelly DiPucchio’s Grace for President this election season. For girls and boys, 4-8.

of note: I have noticed this with Lane Smith in particular: but the placement of the text in sequence with the illustration is particularly brilliant. One understates the other, the first setting up the second, alternating between which is first text or image depending on story not equal opportunity. Picture books are designed and Lane Smith has a good partner in wife Molly Leach who is a book designer (see bio).

all images belong to Lane Smith and Hyperion; be sure to check out more of his work here; and you can bet I will be posting more about him in the future. meanwhile, my review of Lulu and the Brontosaurus by Judith Viorst, illus by Mr. Smith.