In Widowsbury, an isolated village where people believe “know is good, new is bad,” three outcasts from the girls’ school join forces with a home-schooled boy to uncover and combat the evil that is making people disappear. –publisher

Have you seen that Care Bear television episode or movie where there is a boy who is bullied and this monster takes him over and he becomes super creepy? He was so evil no one was sure the Care Stare would be enough. It came to mind near the end; which is strange because Skary Childrin and the Carousel of Sorrow is far from cheesy or sappy—but it may cause nausea. However, the nausea would come from picturing oozing vomit-covered bodies, and that crow plucking at a worm—no! a finger?! Or physical illness may result from serious anxiety, because there is something seriously creepy going on in Widowsbury and our Skary Childrin are not going to have an easy time figuring out what is going on, and even then…

It was a very odd thing, how starkly the atmosphere changed once one crossed the border between the park and the woods. It was as if someone had drawn a line in the perpetually brown lawn of the park and said, All right. This is ours. The rest is for evil. It wasn’t merely the landscape that changed. The sky was actually darker in the woods. The park sounded miles away even if one stood exactly at the edge. Here the trees reached their naked limbs up and scratched at the dark sky, distortions in the bark making faces paralyzed in anguish. Mist crept low to the ground, curling around each whispering tree as if searching for something it had lost. (158).

Katy Towell has certainly captured that atmospheric in her isolated community of Widowsbury and even more specifically, Madame Gertrude’s School for Girls. The Headmistress is horrid and so are most of the students. There are the ghosts and the Wailing Room. And there are three peculiar girls: “Adelaide Foss has an uncanny resemblance to a werewolf, Maggie Borland is abnormally strong, and Beatrice Alfred claims to be able to see ghosts (she’s also an atrocious speller)” (jacket copy). Things are creepy and weird, and not solely in that quirky-charming kind of way. No, Towell may have humor and style, but she is hard-core set on sending some real chills her young readers’ way. And very real uncertainty. If Towell were to be accused of using a cookie-cutter, it would be deliciously warped one. Maybe something borrowed from when scary stories where still skary.

A less peculiar yet delightfully unusual boy shares the narrative and the adventure: Steffen Weller, son of the cook at Rudyard’s School for Boys (where he cannot afford to attend). He is homeschooled, invents various contraptions, and eats peanut butter sandwiches. He is our access to the world outside Gertrude’s and proves a great counterweight to the peculiar girls. While readers are sure to empathize with the girls, our empathy with Steffan is the more “normal” outcast. Still, especially thinking as a girl, the “gifts” the girls have aren’t the sort a 9-12 would see as kick-ass in real life application, not when normal could mean torment avoidance. And while one would think ‘at least the three girls have each other’ that isn’t the case—not initially. It is only when Miss Delia Peet—the new Librarian—shows up—and then disappears—that everything changes for Adelaide, Beatrice, and Maggie. Steffen finds his own pivotal meeting…

The chapters can be long, and we can be left hanging and wondering a bit. The chaptering makes sense, its just something even Natalya noted as unusual. Towell apparently trusts herself and the attention spans of readers—and well she should. The story isn’t interested toward racing to the end, more like creaking down the hallway and peering through cracks and keyholes in locked doors. I was unable to read this without interruption, but it is absorbing and the story favors an anticipation that has you peeking through fingers—you want resolution and hopefully one person to survive. But there are hardly guarantees. And then you are near the end and the girls, locked in a room while the towns folk are being, well—anyway, the girls are actually getting to know one another while they pass the time in a state other than abject terror.

I see another book coming. The girls and Steffen are resourceful, having interesting abilities, and are very brave, very good, and pretty likeable. You know, with that storm 12 years previous having opened up a gate for weird things to enter Widowsbury, the inhabitants of Pernicious Valley could have their own “Hellsmouth under Sunnydale” (Buffy the Vampire Slayer). Katy Towell creates a great dynamic between characters, and she translates horrible images really well—whether it be someone’s humiliation on stage or their sharp nails scritching on your upper story window in the middle of the night. She is a nice addition to the relatively small collection of truly creepy tales haunting the juvenile fiction shelves. 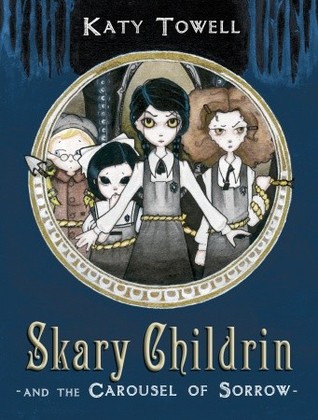 recommendations… Upper Grade-school into Middle; girls and boys. It is not as scary as Chris Priestly and his Tales of Terror, but it flinches less than Adam Gidwitz in his A Tale Dark and Grimm where he warns you something outright gross or evil is about to happen—I wasn’t sure with Towell… She doesn’t seem as interested being clever so much as just entertaining and meaningful—normal juvenile fiction fare—only with that nice touch abnormal and–well, children have grown out of carousels by this age right?  Anyway–if you like scary stories; messages about the evils of bullies; and/or courageous figures with peculiarities.

of note… this is a good R.eader’s I.mbibing P.eril (RIP) read for your youth; even the more sensitive and/or non-reader may find this a pleasant foray into the skarier stories–you’ll at least be sure they’ll never take candy from a stranger again anyhow.

{images belong to Katy Towell; more book themed flyers can be downloaded from here; illustration by Katy Towell is from page 50, “Chapter Three: The Smell of Fear;” )