I’ve heard that Cave of Forgotten Dreams is epic in 3D at IMAX. Well, Werner Herzog’s documentary on the Chauvet cave isn’t too shabby on the regular ol’tv; in fact, it is downright incredible. Now, am I referring to the content of the caves or the documentary? Both.

The Chauvet cave is located in Southern France. It is home to the oldest known paintings on the planet, some 32-35,0000 years old. Even more amazing is how well preserved they are. They appear as if drawn the previous day! The French Ministry of Culture is tasked with protecting these caves and Werner Herzog was given very special permission to bring a small crew in both to follow select experts, and then by themselves. The caves are very restricted. There is a very rigorous set of rules by which they have to abide. You may have heard of the Caves of Lascaux (whose Paleolithic paintings are dated around 17,300 years old). They had been open to the public but with the exposure to air conditioning, high-powered lights, and breathing viewers, fungus began to grown on the walls, and thus the paintings. Those tending the Chauvet cave have learned from the others’ experiences. So, already you have footage of an experience you wouldn’t have otherwise and apparently Herzog uses the 3D technology brilliantly.

A few things over which I marveled and other randomness:

–The paintings are actually layered with thousands of years between each, and yet the collaboration is stunning in the overall composition.

–The instances of Futurism. The wooly rhino’s horn and the eight legs on some animals: these depict movement, like the Futurist used.

–They talked about the absence of human figures (until the very back cave where there is one). Using various angles and approaches of light, you can see the movement/dimension of the paintings; the artists used the contours of the cave walls. But where are the humans? One thought is how the light projects the human form silhouetted upon the wall, the shadows move among the animals.

–The ideas of dreaming: dreaming into existence that which you desire for self or your clan. Paint it and they will come. How spending time in the caves profoundly affected some of the researches, inspiring their own dreaming.

–the film captures the sense of awe. Even I could experience some of the visceral effects in viewing the paintings, and then in acknowledging their age.

–Fertility rituals/imagery. In the furthest cave there is a pendant they cannot access fully but it has the painting of the lower half of a female body (in keeping with sculptures populating the area/cultures following). The upper half is a bison. What you see (kinda) is a minotaur figure. Pretty incredible, huh?

–That the creators of these paintings lived parallel with the Neanderthal.

–there are bones of animals, primarily of bears who nested there and scratched the walls. But the evidence of what animals were roaming captures the imagination. 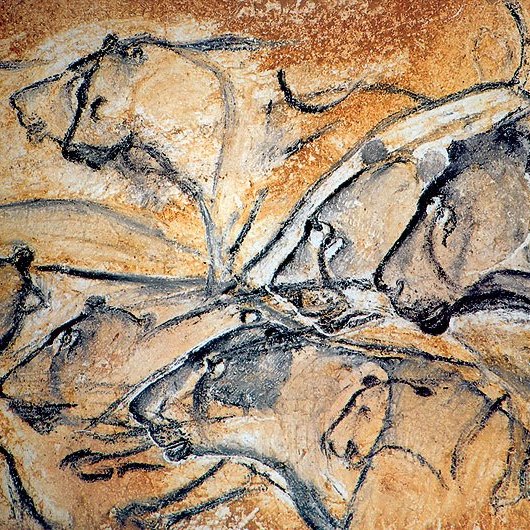 –Herzog talks to experts on what the environment would have looked like, indications of culture, etc.

–that the furthest chamber has poisonous air, which makes me think of the oracles situated around the cracks in the earth that aided in mystical visions.

–the lioness nuzzling alongside the lion is gorgeous.

–that they can follow one of the artists into the cave because he had a crooked pinky finger, and that he was ~6 feet tall.

–lastly, there is a post-script in the film, which is a nod to Herzog’s –er–uniqueness. He talks about it a bit in this “interview” w/ Stephen Colbert on the Colbert Report (June 2011).

I highly recommend this film. [We caught it on Netflix Streaming if you have that option.] I hope it returns to the theater at some point because I would love to experience this one in 3D as well.