Was I disappointed? Nah, but I did get a bit motion-sick for a few minutes there. The strength of the film lies in its casting; more questionable is its ability to minimize the spectacle of the Games so as to not subvert its critical message. The project was as ambitious as the books, and I think it held up reasonably well.

My own rambling response to The Hunger Games (2012):

Set in a future where the Capitol selects a boy and girl from the twelve districts to fight to the death on live television, Katniss Everdeen volunteers to take her younger sister’s place for the latest match. –IMDb

What do you do in a film–for an entertainment venue–where a major part of the narrative’s criticism is the entertainment drawn from watching children hunt and murder other children? The marketing campaign for the film did not do a good job of this, making The Hunger Games look more like a war game or adventure camp. The gravity of those clips of Katniss (Jennifer Lawrence) volunteering meant very little, even to those of us who’ve read the books. The film, fortunately, works hard to return the weight to the narrative and to the criticism.

Director Gary Ross and team try maintain a focus that would strip the Hunger Games of its “entertainment” factor. After the white text on black situate the audience in context, the following lead-in moves quickly to create an anxiety about the Games: You have Primrose’s (Willow Shields) prophetic nightmare (which would cue the unfamiliar viewer), there are the quick and jostled movements of the camera and its seating the audience in the perspective of various characters (thus the camera-work), the ubiquitous (and alien and stark-white) presence of soldiers. While I can appreciate the effort to create a first-person point-of-view for the audience, my slow-witted lenses could hardly focus before a pan or cut to the next image. The frenetic didn’t create anxiety as much as frustration, and I cognitively had to base my setting on the book rather than the film. The first-person proved unnecessary (and a cheat) once that primary narrative device shifted away (thank goodness) for the bulk of the film.

Moving past the fences into the Wild, this is where Katniss is the most at home and at ease; and Gale is with her. Gale (Liam Hemsworth) the only casting choice with which I really struggled–not the image At All that I had in mind. He was good, when he was actually given screen time.

The characterization moves quickly, and this is where I would have liked to not have read the books–to see how well Gary Ross did. The difficulty with the film, which I could appreciate, was how to fit that massive novel into a reasonable running time. For one, you would probably have to cheat a bit to manufacture what otherwise would have been a slow-build of anxiety in the novel. You would have to rely on a cast that can say more with their faces than their mouths as well as a cast that can make every moment of their screen time.

A reason to relax into this film is that unlike many YA-books-into-film, most of the cast is experienced. Jennifer Lawrence was nominated for the Academy Awards for Best Actress withWinter’s Bone (2010). I adore Josh Hutcherson (Peeta), and he did not let me down. He can move from tears to adoration to anger very quickly and convincingly–he is, in a lot of ways, the ambient sound, the mood maker. I felt more worried for what these children were headed into when Peeta’s name was drawn. Katniss, necessarily (?), put on a steely if not stunned demeanor, Peeta has a different luxury–and his vulnerability is for the audience’s sake.

Woody Harrelson as Haymitch, is a casting choice I applauded from the first. Like Hemsworth/Gale he had to make good use of his relatively minimal screen time. Using his cultural cache and that edge between comic and lethal that Harrelson treads so easily, he is effortless in the role. Much of the same can be said of the malevolent, yet grandfatherly, Donald Sutherland as President Snow. [Please, please be in good health through the trilogy.] You know Stanley Tucci (as Caesar Flickerman) was brilliant. And Lenny Kravitz as Cinna had it easy in this film; he was already going to be a crowd favorite.

One of the few departures from the book was how much time Seneca Crane (Wes Bentley), the game maker was given. The departure was a good choice. Looking at Bentley’s filmography, he isn’t as unfamiliar as he’d seemed in the theater. He carried off the cool facial hair and daunting role wonderfully.

I was a bit disappointed by District 11’s agriculture community’s mimicry of the U.S.’s early-edition. Is this what African Americans get to look forward to in the post-apocalyptic future?–but then, I suppose it would be representative of profoundly dystopic imagery.

I heard the unrest behind the casting choice for Cato. Even in line, several teens agreed that they imagined Harry Potter‘s Victor Krum-looking build. I think golden was the right way to go, and not someone whose build could be mistaken for thuggish. I don’t believe that after Alexander Ludwig’s performance anyone could believe he was the wrong choice. He pulled off that really difficult scene on the cornucopia–I nearly clapped I was so pleased with it. Cato is among the blood-thirsty, bred for the Games, and still the reality of the Games and the killing takes its toll. His is a very important reality-check.

And Reality-checks were carefully paced throughout; e.g. the souvenir sword scene, or Haymitch’s looks of disgust.

That the theater was sober and quiet throughout told me Ross and company had done their jobs well enough. Any anticipation to cheer for their team or character aloud was squashed, and why? What was there to cheer for? and with whom would the cheering align the audience member?–those in the Capitol.

The film reclaimed the novel’s disposition. The “romance” of the love-triangle proved an awful distraction from the hard reality the conflict in the story created in the books. This was the audience and marketing’s take, not the books. Indeed, the book was not Romantic in light of the Game and Katniss’ bid for survival (for her’s and others’ sake). There was no denying difficulty of the situation on the big screen. Sure you can still hope that Peeta’s love will not go unrequited, and that Gale will not be forgotten, but it is Katniss that you hope will be allowed the luxury to choose her self.

There was a concern with the violence. Truth be told, N wouldn’t have read the novels until this year, this summer, if I’d had any say.* And I was still anxious with the film. (Hooray that there was no one who looked under the age of 12 in theater!) The PG-13 holds, and there were a few graphic moments. The first was a brief clip looking at a previous victor, and the kill that won him the Games–it was intimate, out-of-control, grotesque. Notably, the two figures looked older and easily mistaken for adults.

Everyone was braced for that entrance into the arena. You could hear the held-breaths. There are graphic scenes here, quick, and involving characters you do not know. That sweet-faced younger boy was implied, but still difficult. Later killings were overheard, suggested, and minimalized while trying not to undermine the horror. Rue’s was still the most tragic and even the grown men cried. A resting Katniss helped measure the time, but it also alleviated the anxiety of the presence of the Hunt. Fear for Katniss doesn’t quite balance with the disgust for the Game, its creators, and its audience as much as it should. Was that because I knew the ending or Katniss seemed so capable and quickly rescued?

I was not completely displeased with Gary Ross’ direction; although I did run a mental listing of those that might have done better. It is his direction that finesses that PG-13 rating. I think the film benefited from having Suzanne Collins on board; I always check for author involvement when a book comes to screen. The overall affect of the film was well-received, though closer looks have me worrying over the pacing, the short-cuts, the memory of that shaky beginning, and the evident desire to replicate the novel too closely. N didn’t care for the [necessary] compression of the ending, even as she understood why. I thought it a good launch into a sequel: we are both very much looking forward to Catching Fire in 2013.

recommendation: anyone older, easily 15-16+, having read the books or no. If you get motion-sick, be prepared. Please do not take your young children; the comprehension of brutality over the antics of a game is necessary, and the violence is not fantasized.

*one of the reasons I dread ‘visits’. 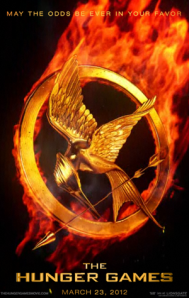 NY Times’ Manohla Dhargis “Tested by a Picturesque Dystopia.” Roger Ebert reviews. “Polishing Mud Balls” thoughts on the film. and “Its All About Books” offers her own “thumbs up.”

3 thoughts on “{film} the hunger games”