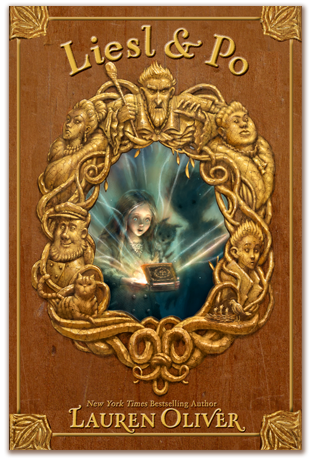 It was the synopsis that caught me, and a recommendation of a friend that had me interrupting my already scheduled reading. Maybe I should have listened to the audio-version, as she had. As it was, I did find Liesl & Po cute, if not downright pleasant. What I wasn’t was charmed, and I think that was one of this juvenile fiction’s intentions.

Liesl lives in a tiny attic bedroom, locked away by her cruel stepmother. Her only friends are the shadows and the mice — until one night a ghost appears from the darkness. It is Po, who comes from the Other Side. Both Liesl and Po are lonely, but together they are less alone.
That same night, an alchemist’s apprentice, Will, bungles an important delivery. He accidentally switches a box containing the most powerful magic in the world with one containing something decidedly less remarkable.
Will’s mistake has tremendous consequences for Liesl and Po, and it draws the three of them together on an extraordinary journey.
From New York Times bestselling author Lauren Oliver comes a luminous and magnificent novel that glows with rare magic, ghostly wonders, and a true friendship that lights even the darkest of places. ~publisher’s comments

Except for a few grammatical errors and a pronoun slip (p92), Liesl & Po was a well-crafted piece. As far as pacing and character and setting, it was nicely executed. I was encouraged by the poetics, the metaphors engaged in talking about The Otherside, from whence Po has come and Liesl’s father has gone, but such was all the novel’s daring. It doesn’t follow with emotional depth. Perhaps that is due more to the subject of inexplicable adoration–Liesl. Is it because she is pretty, can draw, is a damsel, or that she is a dutiful daughter? Or is that she can function on so little food? 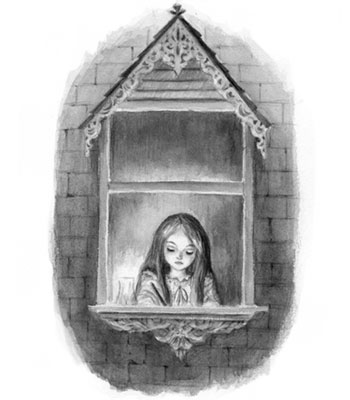 The androgynous Po isn’t the only spoken of in spectral terms. Liesl herself is a bit ghostly; as is Will, for that matter. Mo, another character warranting attention, is haunted by a ghost, and isn’t all there himself. The whole of the world in which they live is cast in shadows, having forgotten the sun–it’s been absent that long. The journey Liesl and Po and others must take is one that restores the life they’ve each lost. Perhaps at the same time, they can lay other things to rest.

Liesl and Po thrives on intersections. You know the fun of the film Hoodwinked! (2005) and the way the stories overlap, the connections that ultimately effect each other’s paths? It becomes a game to look out for those connections. Liesl and Po does much the same, tracing each characters progress, noting where they intersect in fun and clever ways that is sure to entertain the reader.

The narrative is 3rd person and the narrator a storyteller of sorts. The narrator is most certainly omniscient and moves effortlessly from one character to another when it is their turn. The shifts keep the characters interesting and keeps the story moving forward. My only complaint is the asides, the parenthetical. I (a lover of the parenthetical) wish the story had gone without. And then we launch into the happy ending. You knew it would all work out, no spoiler there.
>>but here is a spoiler.<<
Who else was not surprised Po’s living name was Peter. Didn’t he seem marvelously Pan-like?
>>back again.<<

It was the settling of accounts that seemed tearless, and I was sad to have not felt sad. It was as if the story was intent on avoiding a good cry. Parting was not sweet sorrow, which is still possible even when the reader can see it coming. The story rang hollow, and not in the right way. It lacked a melancholia. It lacked anguish.
Liesel and Po had so much of the darkness of a fairytale story to begin, and so much of the light of an Americanized version to end it. Liesel and Po was a fantastic idea, an adventure where grieving and courage and compassion featured heavily–as well as ridiculously well-drawn cast-members… I think most should absolutely adore it. As is, I feel mostly isolated in my cool response to it.
————————————————–
recommendation: boys and girls alike, 7-12, adventures and ghosts and fairy tale references and drawing and an early-1900s feel. The 3 parts are nice 100-page jaunts, great for goal-making with the less-avid reader.
—
of note: I really do not understand the inclusion of the illustrations. They are not horrendous or anything like that (as you’ve noticed), just–seemingly unnecessary. I suppose if you want to make a classic children’s book, they are necessary (?). The difficulty I found was: 1-Lauren Oliver is very adept at transporting the reader, 2-an instance: Mo’s room/apt. is described and a sense is generated, not to mention details. The illustration gives the opposite sense and doesn’t mind the details; the condition of Mo’s room looks more homey and prosperous than we have read. Is it to provide visual breaks?
——————————————————————–
Liesl & Po by Lauren Oliver
w/ Illustrations by Kei Acedera
HarperCollins, 2011; hardcover, 307 pages
[images: via book’s site and created by Kei Acedra.]