The year is 1944. As Allied forces fight the enemy on Europe’s war-torn beaches, another battle begins in a child’s bedroom in Brooklyn. When the nightmarish Boogeyman snatches a boy and takes him to the realm of the Dark, the child’s playthings, led by the toy soldier known as the Colonel, band together to stage a daring rescue. On their perilous mission they will confront the boy’s bitter and forgotten toys, as well as betrayal in their own ranks. Can they save the boy from the forces of evil, or will they all perish in the process? The Stuff of Legend is a haunting and ultimately redemptive tale of loyalty, camaraderie, and perseverance.

If you are already thinking Toy Story stop there. Yes, the toys come to life. That is all. Even in the Pixar toy’s darkest hour (Sid), they’ve nothing on the scale of this graphic novel for the older crowd or The Dark. 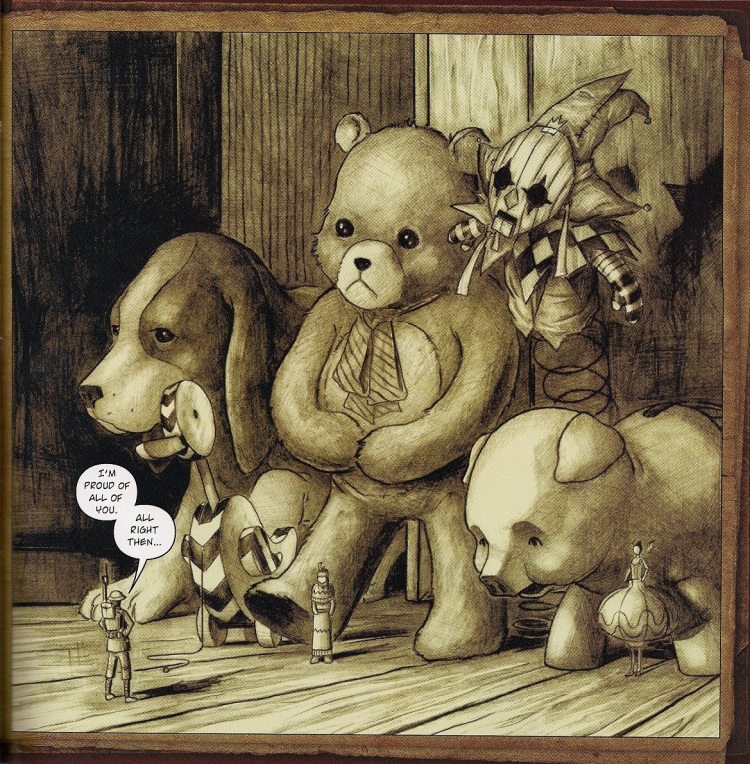 In Book One of The Stuff of Legend: The Dark the toys risk going into the closet and into the realm of the Boogeyman’s The Dark to rescue the boy. There is no explanation for the Boogeyman’s kidnapping of this particular brother from this particular Brooklyn bedroom, and for the time being that is not the concern. The question is: Who will save him? And after entering The Dark the question takes on a greater nuance to: Will anyone survive to save the boy?

A fantastic imagining for these animated toys are how they change once they enter The Dark. They become as real externally as they’ve been internally all these years. It is a wonderment for both the toys and the Reader. It also makes the strain the non-plush family dog and the stuffed bear Maxwell have experienced all the more interesting. Maxwell is no longer a vulnerable teddy, and has been properly scaled to size as an actual bear.

The renderings are of incredible detail and quite elaborate in the battle sequences, the walled city of Hopscotch, the close-ups of characters. These are living breathing figures of action in sepia. And the story both in visual and text is dark, and violent, so mind the sweet children who see that cute teddy on the cover. The peril is intense and the Boogeyman creepy. Even the jack-in-the-box Joker, a good guy, is quite wicked looking.

The toys have context, and not all of our primary character’s stories are revealed in Book One. The character development when necessary is very quick but viable; the Colonel in particular, but also the piggy bank Percy. With Percy you get a very nice flashback to the room, to an earlier time for him, and it complicates things for the Reader. The amusement factor for a “What if a boogeyman stole a child into the dark?” is taken up a notch. 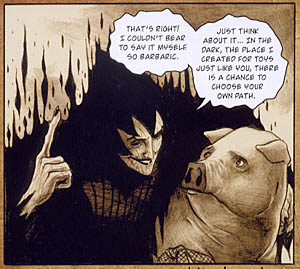 a brief note on the art and layout: The artist and the writers do everything right (as somewhat expected) from transitions to compositions of frame and page to the gorgeously atmospheric. Charles Paul Wilson III brings the collective imagination to life and it is fantastic to join him and the writers there–for a little while. The Dark is a wonderfully scary place; but this alternate realm for toys is better than Oz.

*Th3rd World Comics produced two volumes in 2009, and Villard’s The Stuff of Legend: The Dark (Book One) are these, and then some.

**as noticed on the (above link) Th3rd World Comics site, there are volumes of this title.

–when I say older crowd, 10 & up (w/parents deciding on their own children’s sensitivities–as well as their own)

especially for the younger participants.

5 thoughts on “The Stuff of Legend: The Dark”