Checked out from the Library. I’ve read the first 3, having been a fan since Book 1. Was pleased to find that Book 4 does not disappoint.

In this fourth book in the series, Theodosia sets off to Egypt to return the Emerald Tablet–embedded with the knowledge of some of the ancient world’s most guarded secrets. Accompanied by her cat, Isis (smuggled along in a basket), Theo plans to return the artifact, then explore the mysteries surrounding her own birth and oh, yes– help her mother dig up treasures on her archeological expedition.

But nothing ever works out as planned, especially when a precious treasure appears suddenly, and then just as suddenly disappears . . . When the Serpents of Chaos get involved, Theo finds she’s digging up a lot more than she expected!~dust jacket.

If you have not yet discovered R.L. LaFevers’ Theodosia Throckmorton series allow me to introduce you.

In the first novel, Theodosia and the Serpents of Chaos (2007), LaFevers introduces us to the peculiar young daughter of the British Museum of Legends and Antiquities’ Head Curator and a successful American Archaeologist who lives in London in the opening of the 1900s. As the book’s synopsis reads, “Her father may be head curator, but it is Theo—and only Theo—who is able to see all the black magic and ancient curses that still cling to the artifacts in the museum.” With the gift/curse of seeing what haunts the museum, an education in hieroglyphics, and faithful sidekick—her cat Isis, Theo spends her days reading, prowling, and rendering evil artifacts powerless. Then her mother comes home from a dig with a very powerful artifact that has garnered the interest of a nefarious group called Serpents of Chaos.

Theodosia is drawn into the intrigue surrounding the artifact and a quite perilous adventure ensues. And it continues on from there with new intrigues involving new artifacts and new and interesting characters. In the continuation, however, there are constants held throughout the series. The friends she makes are further developed, or at least linger in reference. The same villains, including a particularly menacing arch-foe, strike from the shadows. And Theo’s familial difficulties develop still further.

If I was _____, then it seemed time to use those skills to my own advantage. All my life, whatever abilities I possessed had given me mostly grief. And while it was true that they had allowed me to keep my friends and family (relatively) safe, those abilities had also made my life wretchedly difficult. They had forced me to lie to my family, created discord between me and my brother, and caused my grandmother to disapprove of me, not to mention all the untold terrifying moments and haunting nightmares.

But what if that was because of my inability to understand the true nature of my gift? So far, I had seen only the dangerous aspect of magic in the world. What if my abilities could also tap into the good heka? If I was stuck being peculiar, I’d prefer to be peculiar on my own terms, thank you very much. (312-13)

Since birth Theodosia has led a bit of a double life, and it continually pains her that her parents find her so odd. At the beginning Grandmother Throckmorton provides some comedy (in book one), but as the story progresses through the series the effort to keep secrets, keep lying, and maintain proper behaviors begins to wear on our heroine—and really, it becomes more and more serious. She feels more and more alone and burdened by her own peculiarity and the tasks set before her. In  4th book, it seems Theodosia must come to some grip with her own peculiarity and society before expecting her sometimes bewildered often neglectful parents to embrace her strangeness—and maybe the author can finally reveal something of the heroine’s true self to her parents. We’ll see. And if so, what then?

In book three, Theodosia and the Eyes of Horus (2010), a mystery surrounding Theodosia’s birth was introduced. In this latest installment, LaFevers sheds light on this mystery as promised—and it holds further promise for fantastic future adventures. But will there be more? I hope so. * 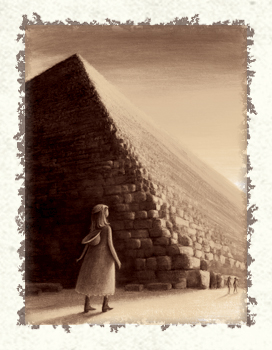 At times it may feel as though Theodosia is not the 11-year-old child, especially if you do not know many 11-year-olds who have long held particular (possibly pervasive) interests. Then there is the fact that her parents are intelligent, and as calamitously curious as Theo is, her knowledge and abilities aren’t too stretched. If anything, her ability to surprise and impress the adults in her world is an encouragement for young readers to brush up on their own brilliance. But ever there is the reminder that Theo is of an earlier historical time. She is practically ignored and constantly underestimated (okay, perhaps that is not so different). That she is brilliant, and yet ignored and underestimated creates a rub; it both works in her favor and creates hurt feelings and incredible frustration. Theodosia is forced to become more confident in her resourcefulness and her worth. The protagonist’s courage is not rendered with unbelievable ease; actually, Theo is all too reliably young and unsure and still needing of her parents’ love and approval.  It is refreshing to have an impressive young heroine whose parents’ are kept heartbreakingly and sometimes humorously in mind. Theodosia is well suited for all audiences, but most especially her primary one—juvenile readers/middle-graders.

For a set of historical novels, and paranormal ones, the adventures are appropriately intriguing and perilous. LaFevers does not soften the physical or emotional costs, but by no means pushes her audience’s limits. Her writing style is gives first person narrator Theodosia a consistent voice that is able to mature, including perfectly placed moments of humorous self-deprecation along the way.  The historical settings come to life without weighing the reader down with too much detail, and the research the author has done on Egyptian history and lore seeps out of the text effortlessly. These aren’t small books at 300+ pages, but the pacing does draw the reader on through to the end.

If you have found Rick Riordan’s treatment of Greek myth in the Percy Jackson series and/or Egyptian myth in the Kane Chronicles to your liking than you will appreciate LaFevers approach even more so. She isn’t modeling her hero’s adventures after a previous incarnation’s quest, but her adventures are just as steeped in the lore with which she would intrigue her readers.

Of course, her characters are placed in a less contemporary setting which may put off potential readers. —a shame, as I think the timeframe LaFevers uses lends itself more satisfying without alienating the possibility that readers could still daydream themselves into fantastic scenarios—especially after this latest installment. (Also, her protagonist is less annoying.)

Besides my liking to read stories set in the late 1800s-early 1900s London, the setting really does work in creating useful conflict for Theodosia. She is a child, a girl, and when in Egypt, a foreign oppressor. That she is an odd duck is icing. That it is early-1900s allows for villains we can readily identify—a certain group of Germans. That it is the early-1900s allows for other politically tense climates, like the occupation of Egypt by the British. Book 4 begins November 1907 in transit toward Egypt. A brief perusal of “History of Modern Egypt” on Wikipedia one can find, “In 1906 the Denshawai incident provoked a questioning of British rule in Egypt. British occupation ended nominally with the establishment of a protectorate and the installation of sultan Hussein Kamel in 1914, but British military presence in Egypt lasted until 1936.” If you’ve read, or plan to read this series, LaFevers provides a reading list on the series’ website. She also hosts a page on Theodosia’s life and times. Regardless, Theodosia is curious and compassionate and is a fine companion in encouraging her readers along a similar path.

The Theodosia Throckmorton series is best read in order. LaFevers is seamless in her references to earlier books and situations, including a refresher on characters, but she is hardly laborious and while you may not feel lost in delving into each new book/adventure, it is truly beneficial to begin with book one**.

While reading, Indiana Jones comes to mind at turns. And if you enjoy Nancy Springer’s Enola Holmes Mysteries, you might should give Theodosia a try. If you are looking for a refreshingly different source of lore and setting and/or an educational resource that doesn’t feel like you are being institutionalized, give Theodosia Throckmorton a go.

Also, Natalya read LaFevers’ Nathaniel Fludd Beastologist series in quick and excited succession, so I will go ahead and recommend those here as well.

*after a bit of poking around I found this from “Theodosia’s Blog” in an “Answering Reader Questions” post on July 25th, 2010.

“There will be at least five Theodosia books and probably more. As always, with everything in publishing, it depends on sales numbers. The final title for Book Four is THEODOSIA AND THE LAST PHARAOH, and it comes out May of 2011. The working title of Book Five is THEODOSIA AND THE FLAME OF SEKHMET, but that is subject to change. It will be coming out sometime in 2012, most likely.” Yay!

**an excerpt from the first book.