picked up at the Library after reading Logan @ Rememorandum’s review.

Josh Simmons’ first original graphic novel is a haunting, entirely wordless story about a group of teenagers who discover a mysterious, abandoned mansion in the forest. Their curiosity draws them inside, where both adventure and unexpected tragedy away. ~back cover

I couldn’t help but think about Mark Z. Danielewski’s House of Leaves (Pantheon, 2000) while reading Josh Simmons’ black/white wordless comic House. I was thinking about the section of the novel where Johnny Truant goes in search of the house and collects a history about it. He comes across an old  journal entry where these two men found a stairway (?) in the midst of the forest. Granted, it wasn’t a mansion, but the residual chills are felt just the same. This place was unnatural and the house threatened to swallow its occupants whole. House is familiar. 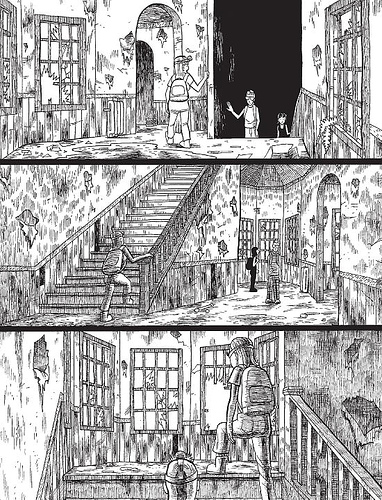 Simmons’ House begins as more of a casual teen-aged adventure. A harmless lark to explore a decrepit old manse in the middle of no where. Large panels and more white than black ink hardly create anxiety. But as the panels decrease in size and increase in number, and the black ink literally swallows the images, tension/suspense is produced. 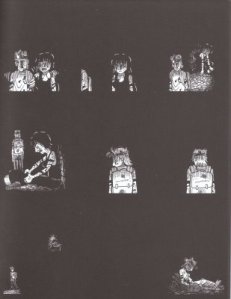 It incredibly difficult to see the scratched illustrations as the end nears and by then you are somewhat grateful. There are some disturbing images.

From the two page vista of the opening pages, the establishing shots, we’ve been drawn into the depths of the house and into the oppressive dark succession of tiny frames. Still, the beginning isn’t without discomfort. Who is the young man, the first character to whom we are introduced? Does he know the girls sitting outside the mansion? Was this an arranged meeting? They have headlamps and packs, but I suppose it could be weirder than a pre-arranged meet. There is some ambiguity that may frustrate some and excite others. 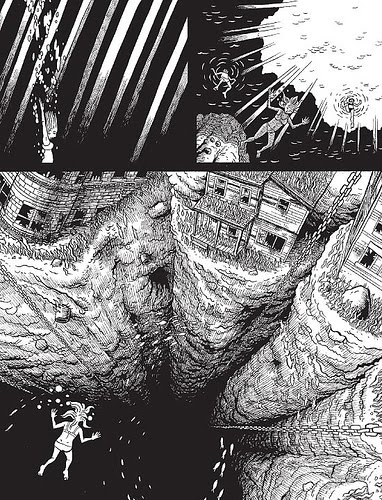 We enter the mansion and the dark-haired, darkly-dressed girl is fairly quickly distanced (other than visually) from the other two who couple up after a swim in the sunken town they come across. Yes, I said a sink hole filled with water. Yes, comic book characters can hold their breath much longer than an actual human. It is an exciting sequence that is a definite upswing to this adventure. But once the distancing begins, greater divisiveness enters in. Should the blonde follow the boy, or her girl friend? The doorway to the left, or the monster hole to the right, which we have to imagine how the young man guessed that would go somewhere—I am guessing it was because it was barred by a chair shoved up against it as well as some planks of wood. (or had he been there before?) Meanwhile, the portrait (in pristine condition) creepily looks down on them from the bricked up mantle.

By now the gutters between panels have subtly thickened. The frames are reasonable size still. No weird angled compositions. Everyone still feels comfortable. Except Danielewski readers because they enter a dark hallway, and they find stairs. And as the random piece of furniture and peeling wallpaper turns to brick, fans of Poe feel their pulse increase.

They shouldn’t go down those steps. The sequence is tense and foreboding. The page where the three begin to descend is fantastic. wish I could give page numbers but it is the right side page, you’ll know it when you see it. The blonde girl is look anxious and already somewhat regretful. catty-corner on the page? the last frame before you hurriedly turn to see what happens next? That was nice.

I won’t say much more, but what follows in the disintegrating dark involves some terror-induced moments. I think I would have appreciated a more ambiguous ending, a sudden tick tick tick of a reel expended. But it is apparent Simmons  had a trajectory in mind.

House is a good, if not typical, horror-story. Teens will especially dig it. I’m sure something could be read into the story some implication or metaphor…Nothing came readily to my mind. Perhaps it was because I’d read Danielewski’s House of Leaves, but the story didn’t linger or haunt the same; nor was any of the psychological trauma inflicted—but it goes without saying that House is the shorter read. I could easily revisit it again, and play out a different dialog.

Logan sums up his review so nicely, I am going to steal quote it:

“If you’re looking for an eye-opening, brilliant graphic novel, House isn’t it. But if you’re wanting an adventure, thick with claustrophobia and tragedy, and some beautiful artwork, check this book out. “ 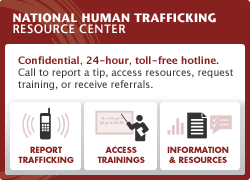