Thor (2011) was at the local drive-in and an impulse on our part. We were content to wait for the DVD, but why not?!—the cost for the family equals the cost of one at the indoor screens. If you haven’t a drive-in or dollar movies, wait for the DVD.

A smattering of thoughts on Thor, directed by Kenneth Branagh, starring Chris Hemsworth (Thor), Natalie Portman (Jane), Tom Hiddleston (Loki), Anthony Hopkins (Odin), and Stellan Skarsgård (Erik Selvig). Check out the links at the end of the post for more.

—The soundtrack was awful. Not long in, I can’t help but remark upon it. Sean agrees, “I am expecting Falkor* to break through the clouds any minute now.”

—The pacing was unfortunate. I think that indoors, the entrance to Asgard might have established appropriate awe, as it was, it was at least 34 seconds too long. I didn’t mind the cutting back and forth between Earth and Asgard but time afforded neither enough development. The effect, a 114-minute trailer. The danger of creating a film with its mind elsewhere?—say, on The Avengers?** I wonder how the film might have been handled differently, perhaps focusing the story where it feels strongest, on the relationship between brothers and their father? 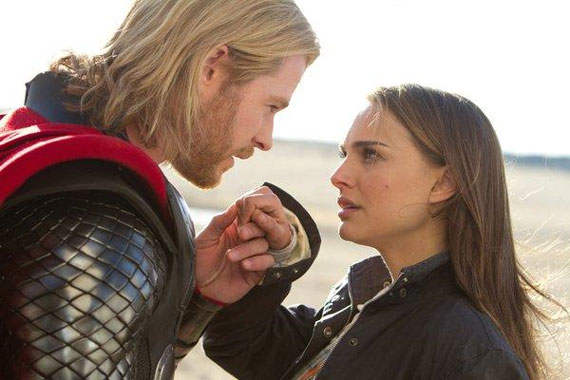 —The unconvincing romance between Thor and Jane… If you’ve limited time, how do you cast your two love interests for maximum efficiency? Him: handsome (sexy) and gallant. Her: an actress already idolized by Geekdom; Jane is Natalie Portman, of course, Thor would find her appealing enough to want more than a passing (and tepid) fling. If only I could see a show of hands to the question: who found their romance convincing enough for that ending?

—Who is this Heimdall (Idris Elba) character?— very cool. And I had no idea Thor was that amusing to watch in battle. Sean finds the comic character absurd. True, Gaiman has a more appealing portrayal, not to mention the older Norse stories. Chris Hemsworth was good in his role as Thor: arrogant, good comedic timing, gorgeous smile. I wasn’t sure about the casting of Anthony Hopkins going in, but how could I doubt him; he merely had to channel Don Diego de la Vega*** and look Nordic.

—The Science and Magic/the Real and Lore, are surfaces scratched; two worlds colliding with Hollywood action-film aplomb. Kenneth Branagh handles the comic book superhero like a literati would, infusing it with a desperate desire to lift it from the gauche and low brow it needn’t be. Too bad they and we wouldn’t let him.

Those looking for light and explosive fare with expansive vistas, silly humor, and general bad-assery by the warriors of Asgard, Thor is a delight.

*The flying dog-like creature from The NeverEnding Story (1984)

**The Avengers (2012) written and directed by Joss Whedon: bringing together Iron Man, The Incredible Hulk, Captain America, Thor, and Hawkeye who is played by Jeremy Renner in Thor in which we are introduced to him as the Agent who chooses the bow over gun, assigned to keep Thor in his sights.

Based on Thor by Stan Lee, Larry Lieber, Jack Kirby

A.O. Scott’s review, “Have Golden Locks, Seeking Hammer” in which he begins

“As I stumbled out of the Imax multiplex all-media advance screening of “Thor,” depositing my 3-D glasses in the appropriate bin, I thought of seeking shelter: in a nearby bar; under a passing bus; in the velvet shadows of an art house playing the longest, slowest, most obscure movie imaginable.”

Roger Ebert’s Review in which he remarks

“The story might perhaps be adequate for an animated film for children, with Thor, Odin and the others played by piglets. In the arena of movies about comic book superheroes, it is a desolate vastation. Nothing exciting happens, nothing of interest is said, and the special effects evoke not a place or a time but simply special effects.”

7 thoughts on “thoughts about Thor (the film)”