by Kim Dong Hwa; translated from the Korean by Lauren Na)

Found perusing the First Second site, and borrowed from the Library.

In a timeless village in rural Korea, young Ehwa and her widowed mother live quietly together, best friends and confidantes. With each year that passes, Ehwa blossoms into a young woman as the spring rains bring a new glow to the verdant landscape around them.

More changes come with the spring: a chance meeting with a young monk stirs new emotions in Ehwa’s heart, and a mysterious artist becomes the first man to catch her mother’s eyes since Ehwa’s father died. As Ehwa discovers love and desire for the first time, her mother learns to open her heart again.

Kim Dong Hwa’s graceful drawings and highly poetic language create an intimate portrait of two women who grow and change but never love each other any less. The Color of Earth is at once a daring tale of sexual awakening, and a tender story about a daughter and her mother. ~ inside cover, The Color of Earth.

In the second installment, beautiful young Ehwa continues her journey towards womanhood while her widowed mother’s affair with a traveling scholar intensifies. Ehwa, discovering what it is to love, finds herself keeping secrets from her mother for the first time in her life. (inside cover, The Color of Water)

Ehwa, now a confident young woman, finds herself in the same maddening situation as her mother: waiting for a man. Her mother hopes for the return of her roaming lover, and Ehwa, in turn, gazes up at the same moon as her fiancé […] who has gone to sea to seek his fortune so that he can marry her. (inside cover, The Cover of Heaven)

I had decided to read The Color Trilogy by Kim Dong Hwa (translated from Korean by Lauren Na) after seeing it on the First Second website, but I was somewhat dreading it. I chose it because wanted to balance out my juvenile comics with more adult fare and expand my cultural horizons. But the idea of following a mother/daughter drama through the pangs of budding sexuality and a widow’s loneliness did not appeal. I received the first one from the Library and flipped through the pages, found I liked the Artwork, took a deep breath, and fell head-long.  Yes, one should have all three on hand, because after one, you’ll want to continue into the next.

“There’s no difference between the way a man or woman yearns for companionship. It’s because they’re both human that they can say wise and unwise things alike.” ~Ehwa’s mother (The Color of Heaven, 66).

Please do not mistake the trilogy for Chick Lit, nor is it meant only for the female gender.  Hwang Min-Ho writes in his critique at the end of the book “Painting the Lives of Women with Rain and Flowers:”

“The Color of Earth became a turning point in the history of manhwa [(the equivalent of the Japanese manga)]. It was the first time that a book drawn in the sunjung style enjoyed such unparalleled success with an adult audience composed in equal measure of men and women. […] The author’s markedly feminist approach is noteworthy not only because he is a man, but also because many of his readers are as well. […] That chauvinism is evident among the villagers of The Color of Earth, who gossip about the young widow, comparing her to a beetle, and among the little boys, who tell Ehwa that anyone without male genitals is deformed. Fortunately, positive masculine characters like the pictograph artist and the young monk Chung-Myung help preserve a certain balance.” (314-15)

While Ehwa and her mother occupy most of the narrative, the young monk, “Picture Man,” and others feature as well; they, in more than one way, create a balance in the book.

The Color of Earth begins with a pair of young men watching beetles mate. This is where the young girl-child Ehwa comes upon them and overhears them talking about her widowed mother, the tavern owner, and how she is like a female beetle, “The beetle’s a bug that’ll take any mate.” /“Then I suppose them beetles are just like the tavern owner—little Ehwa’s mom.”/“I heard the village elders say that Ehwa’s mom will have anyone that’ll take her.” (15) Ehwa runs off only to stumble across two boys having a contest to see who can pee further. A contemplation of anatomy ensues, in which a confused Ehwa, in an effort not to appear deformed, claims she has a bigger gochoo then theirs—and no, they can’t see it. The first chapter sets the tone for the rest of the series: Ehwa is young and naïve and her innocence makes for awkward (and sometimes humorous) exchanges. The majority of the males in her village are coarse. Ehwa’s mother proves somewhat vulnerable, but is determined and wise. And mother and daughter are very close (as the bathing scene punctuates).

I didn’t know what a gochoo was, but Lauren Na provides asterisks and notes at the bottom of the pages for words she chooses not to replace in translation, e.g. *Gochoo is the word for chili pepper and is also a euphemism for penis. I figured out the euphemism part. In other notes, Na highlights a cultural significance a foreign reader would likely not know, but needs to know to enrich the text. The text and images are laden with context, subtext, and symbols.

The Color of Water

“The Color of Earth tells the story of two women at different stages of life, and we come to understand them through the mysteries of nature, rain, and flowers” (Min-Ho, 318). In the “Painting the Lives of Women with Rain and Flowers,” Min-Ho touches on the use of flowers and rain as metaphors, and Lauren Na provides some cues, but the text is not insurmountable on its own. It was, however, a bit overwhelming at times.  Very little is spoken in a forthright manner. What is, is usually depicted as coarse; Ehwa’s friend Bongsoon is the very embodiment of transparency and while Ehwa might come across as a prude (and quite humorously and painfully naïve), Bongsoon is crass—big mouthed, big motioned, wild-edged with her escaping tendrils. There were occasions I had to re-read a more subtle exchange to feel confident in my interpretation—Having the images helped, of course.

Text and Image fuel one another in the way a good comic requires. The above page is lovely in composition and read without context, but the poignancy that squeezes my heart even now, is created in the building of story.  We gain a great deal of the story through dialogue and personal musings [where I believe all are spoken aloud; which makes the reading feel like I am watching anime (the disembodied narrative)]. And the illustrations carry their own import; the silent frames weighted—speaking volumes in its own way.

The Color of Earth. (the artwork combines intricate detail with the looser cartoon forms, used at will and quite effectively.)

The novels create an unusual closeness between Ehwa and her mother, they are all each other has. The mother doesn’t seem to have an older woman and thus has to negotiate her daughter’s growing up alongside her. She blushing admits to perhaps sharing too much of her own life with Ehwa. She also has a protectiveness of her child that is criticized in The Color of Water that furthers the differences of the pair from their environs. Still, there are secrets kept and arguments and misunderstandings, Kim Dong Hwa skillfully guides the reader through the oft volatile adolescence of Ehwa. Even in the best of families, the novel seems to say. And though Ehwa and her mother are not even remotely “traditional” they are the best of family.

The Color of Earth

Ehwa and her mother are obviously the central focus of the Color Trilogy but Kim Dong Hwa develops other characters who allow for compare and contrast, who reveal different paths, different blooms, who function as stepping stones along the Ehwa’s assent into womanhood. Some are more Typical than others, and some are very much enjoyed. Kim Dong Hwa has a good instinct for timing and drama, inserting well-tuned comedy to counterbalance the weightier moments. He moves the story along at a surprisingly quick clip without sacrificing the ability for the novel to emote. He also culminates the trilogy in a way that isn’t solely focused on Ehwa and her mother. The third part of an ever present triangle still presides. Love is in the air, and we are all susceptible to its longing. And we are all sensual beings.

Kim Dong Hwa finds a way to maintain an intimate novel despite its incredible scope, its numerous inclusions. He develops an atmosphere that draws a body out of isolation, into memory and companionship with the very human conditions the characters portray: the discovery of the human body, its sexuality, its needs and desires, the sometimes clumsy always beautiful ways of growing into physical and emotional maturity—how it all affects the people who surround you. Nature isn’t the only impetus with a profound remark upon a changing body. Kim Dong Hwa skillfully relays the remarks family, friends, and society make as well. 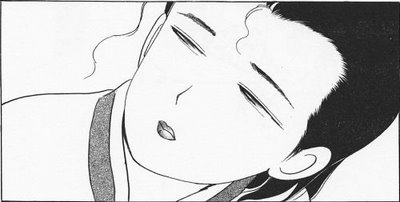 Note: Both The Color of Water and The Color of Heaven have a Reading Group Guide that would provide discussion questions and an “About Graphic Novels” where a guide to reading one is included. This trilogy would make for a good book club read–so much fuel for good conversation.